Do you have a great porch or patio space that you don’t use as often as you’d like to because it’s too hot or muggy? An outdoor ceiling fan may be able to help you use that space more often and enjoy your time outside. Even for large spaces, there are outdoor ceiling fans that move a lot of CFM — cubic feet of air per minute. So, how do you know which outdoor ceiling fans move the most air? We’ve done the research, and we have the answers for you!

The three outdoor ceiling fans that move the most air are as follows:

In the remainder of this article, we’ll describe each of these high-airflow outdoor ceiling fans, explain the five aspects of ceiling fans that encourage air movement, and answer some of the most-asked questions about when and where to use a ceiling fan. Keep reading to learn more!

Five factors determine the amount of air movement a ceiling fan produces: the size of the blades, their pitch, the speed of blade rotation, the distance between the blades and the ceiling, and the power of the fan’s motor.

Most small and medium-sized ceiling fans have 4, 5, or 6 blades; those 52″ in diameter or larger generally have 8 to 10 blades. 2- and 3-bladed fans come in all sizes and are typically styled to look like propellers. The number of blades on a particular fan is a matter of appearance and is irrelevant to the fan’s capacity to move air.

The size of a ceiling fan’s blades does matter, but not in the way you might think. Long, wide blades do not necessarily move the most air, and those that are shorter and slimmer can sometimes move relatively large quantities of air. However, in any particular make and model of ceiling fan, longer blades will move more air than shorter ones.

How Does The Angle Of Ceiling Fan Blades Affect Air Movement?

The angle (pitch) of a ceiling fan’s blades is one of the most important factors in optimizing airflow. A pitch of 10 – 12 degrees is relatively flat and moves less air. A steeper pitch — 14 or 15 degrees — moves more air, so the blades encounter more resistance; thus, a more powerful motor is needed to get the blades spinning rapidly enough to maximize airflow.

Fan speed is a critical factor in determining air movement. The speed of a fan is described in RPM (the number of rotations per minute); the higher the RPM, the more air the fan moves. Most ceiling fans on the market today have at least three speeds; for maximum control over the amount of air movement, select a fan with six speeds.

How Far Below The Ceiling Should Fan Blades Be For Most Air Movement?

The ideal gap between the ceiling and fan blades is 10 to 12 inches. This provides enough space above the blades to circulate air optimally throughout the room. If your ceiling is too low to safely allow for that large a gap, you can select a fan with a „ceiling hugger“ mount, which keeps the fan blades close to the ceiling but still allows for ample airflow.

If, on the other hand, you have a high ceiling, you should hang your fan on a downrod, 8 to 9 feet above the floor to maximize air circulation for you and your guests.

The more air a fan moves, the more powerful motor it needs. For example, large blades pitched at a 14- or 15-degree angle will encounter maximum air resistance (and move more air), while smaller blades or a lesser pitch encounter less resistance (and move less air). Although a powerful motor will cost you more initially, it will also last longer and provide better airflow. Ideally, for maximum air movement, purchase a fan with a powerful motor, 6 speeds, and a 14- or 15-degree blade pitch.

Which Outdoor Ceiling Fans Move The Most Air? 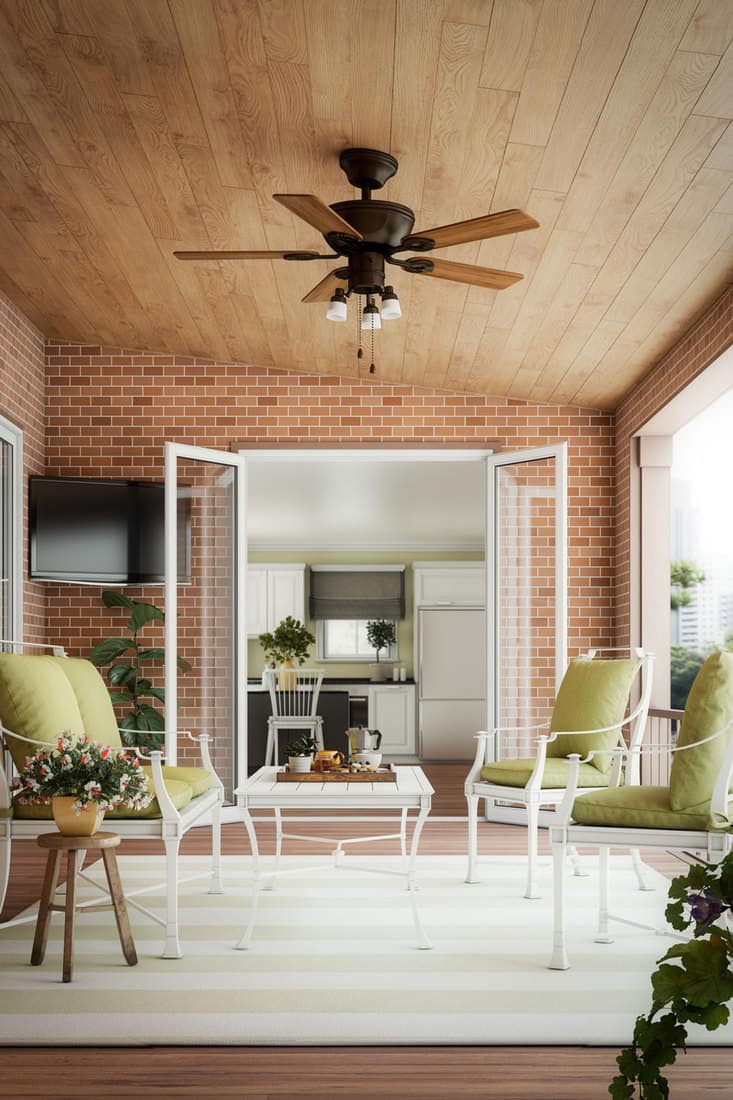 A ceiling fan’s airflow is measured in the CFM (cubic feet per minute) of air it displaces at its maximum speed. A CFM of 7,000 or higher qualifies a fan as „high-airflow.“ Most ceiling fans that achieve this level of airflow have a diameter of 70″ or more, and they tend to be modern and industrial in appearance. Below, we describe the three highest-airflow outdoor ceiling fans available, as well as two others that move slightly less air but have unique qualities desirable to many homeowners.

The TroposAir Liberator stands head-and-shoulders above its competition in terms of air movement, with a CFM of 15,754. The Liberator is an industrial-style ceiling fan with an 82″ wingspan, six speeds, and nine blades angled at a 14-degree pitch.

It includes extra features that most homeowners desire in an outdoor ceiling fan: remote control, LED lighting, and a high-efficiency 55-watt DC motor that keeps its electricity usage low. It’s available in bronze, nickel, and white.

The Colossus, with its 96-inch blade span, moves 13,644 cubic feet of air per minute. It has six speeds and comes with both a remote control and wall control panel. The six blades of the Colossus are made of extruded aluminum, rather than the ABS composite that is typical of outdoor fan blades.

The body and blades of the fan are available in nickel and espresso colors; if you prefer a whimsical appearance, you can also purchase the blades in a variety of bright colors. The Colossus features a second-generation DC motor which is quiet, powerful, and energy-efficient.

The third-highest CFM rating belongs to the Minka-Aire Extreme, at 12,176 cubic feet per minute of air movement. This fan has nine blades and a 96″ blade span, with six speeds. It comes with a remote control and optional LED light. The Minka-Aire Extreme features a highly energy-efficient (31 watts) DC motor. It is available in nickel and bronze colors.

Although the Quorum Proxima moves substantially less air (8,327 CFM) than the three competitors described above, we include it here for two reasons. First, it is the only wet-rated ceiling fan on the list; second, the ingenious upturn at the end of each blade gives the Proxima a sleek, non-industrial look that the others lack.

The Proxima features eight blades with a 14-degree pitch and 72″ blade span. Unlike the other fans on this list, it does not come with a remote control or a light fixture. It is available in bronze, nickel, and white.

The Monte Carlo Maverick also moves less air (8,244 CFM) than the Liberator, Colossus, or Extreme; however, it still falls well within the definition of a high-airflow fan. With its three hand-carved balsa wood blades, it avoids the modern industrial appearance of other large outdoor ceiling fans. The Maverick features six speeds, a remote control, optional LED lighting, and an energy-efficient DC motor.

Because of the angle (pitch) of the fan blades, the direction in which your ceiling fan spins does make a difference in the way it moves air. In the winter, your fan should spin clockwise: so, the upper edge of each fan blade contacts warm air near the ceiling and pushes it out and down. In the summer, the fan should spin counterclockwise so that the flats of the blades push cool air downward, creating a wind chill factor that keeps the area feeling cooler.

Can I Use A Porch Fan In The Winter?

The question of whether to use a porch fan in winter is largely dependent on where you live and how harsh your winters are. In warmer climates, you can certainly use a porch ceiling fan, spinning clockwise, to keep a screened porch cozy. In colder areas such as New England and the Upper Midwest, it is unlikely that you will need the fan during winter months.

Is It Okay To Leave Ceiling Fans On All The Time?

Most ceiling fans are manufactured so that they can be used 24/7 for long periods of time without damaging their motors. However, there are several reasons not to leave your ceiling fans on all the time.

First, the motors generate a small amount of heat; if you’re using the fan to cool a room or porch area, this heat works against the cooling effect. Second, even the most energy-efficient ceiling fan uses electricity; so, if you’re not in the room to enjoy the fan’s cooling effect, it costs you extra money to leave the fan running. The most logical time to leave a ceiling fan running 24/7 is when you are using it in winter to recirculate warm air through the room, thus reducing the amount of time your furnace has to run. 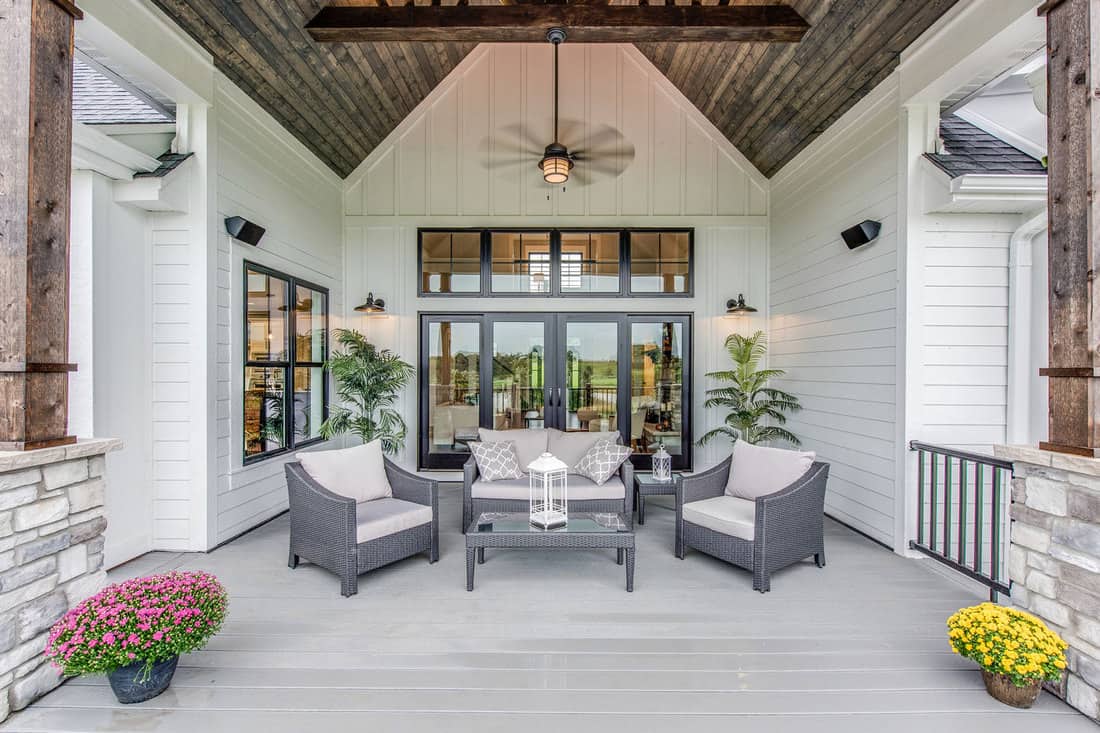 An outdoor porch ceiling fan can be a great way to keep yourself and your guests comfortable while enjoying sitting outdoors. One of the giant, super-high-CFM fans we described above can keep you cool on even the hottest days, while either of the smaller fans provides excellent air movement and non-industrial styling. Although high-quality porch ceiling fans aren’t cheap, they are well worth the investment as they bring you comfort for many years.

You may also enjoy the following posts: