Throw pillows are to sofas what keys are to locks. They add style and comfort to your living room through lively patterns colors, and textures to create the look you want to have. Then again, nobody likes an empty couch. Insert a throw pillow or two (or ten!), and you’ve created the most welcoming space to cozy yourself into.

What’s the best way to arrange cushions and throw pillows on a corner sofa or sectional? In most sofas, sectional or otherwise, all you have to do is set aside the corner and middle spaces for throw pillows.  The number of throw pillow depends on the sofa’s size. Average sized sofas have enough space for 3 to 6 throw pillows. Larger sofas allow you to play with 10 or more throw pillows.

There is an art to arranging cushions that is easy to master. Keep reading to learn how to artfully dress your corner sofa or sectional.

What is the Purpose of Throw Pillows?

There was a time when throw cushions and pillows were used to specifically serve a functional purpose, intended to provide support and comfort. But people soon realized their potential as a great decorative tool because it is relatively easy to pack color and pattern into their tiny spaces. Today we have a limitless combination of sizes and shapes, all of which create an eye-pleasing arrangement.

Throw pillow share many of the same features as sectional sofas, in that, that they are composed of multiple independent smaller pieces that can be arranged in into any shape. Arranging throw pillow son your sectional sofa is based entirely on your spaces, preference, and seating. The arrangement depends on the time of the day, the mood of the audience, and the general taste of the owner.

For example, if the size of a sofa is small, it is ideal to use fewer throw pillows to maximize seatings. In the case of larger sofas, however, it makes much more sense to arrange several throw pillows. 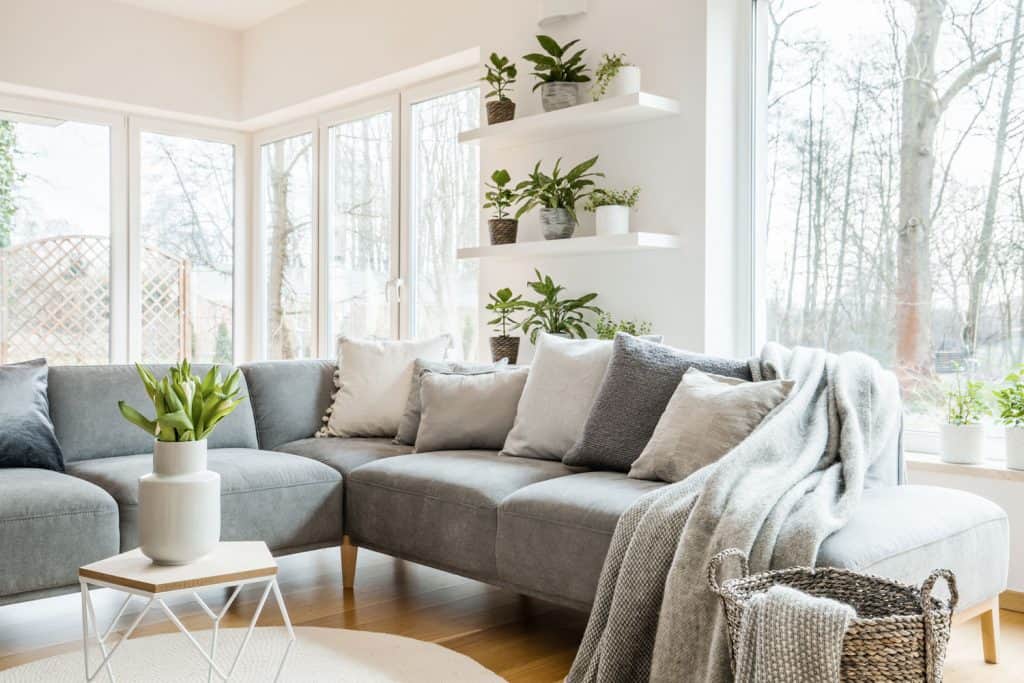 Start with a Strong Base 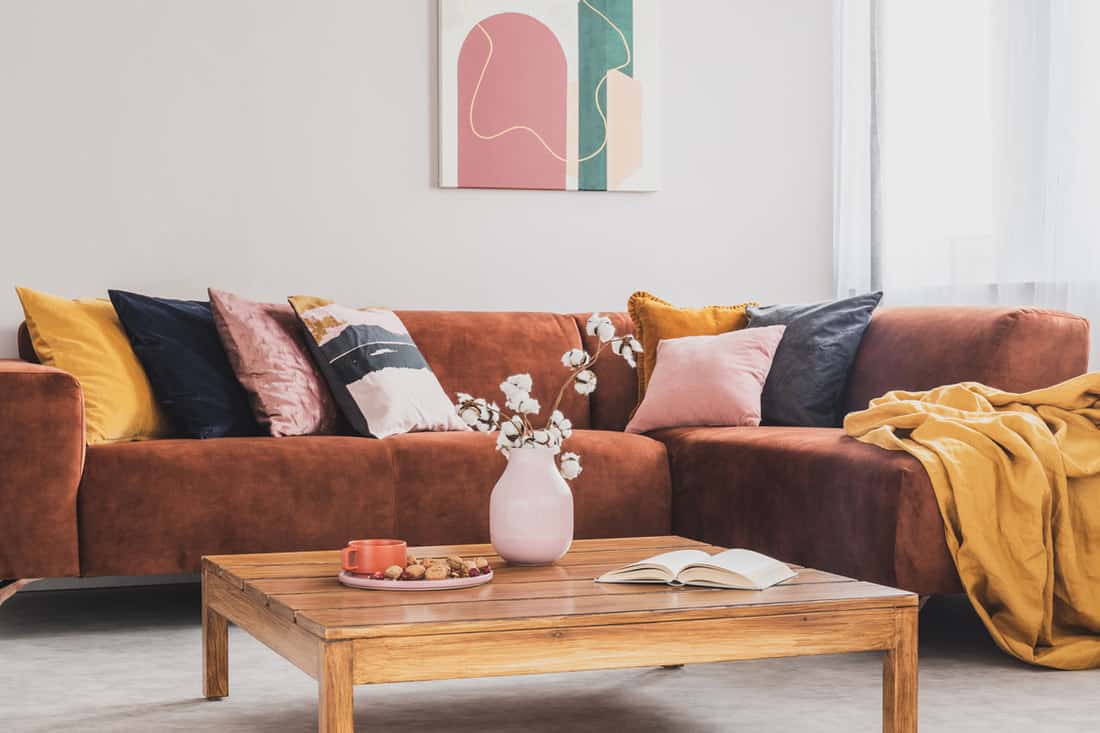 Because of their arrangement, sectional sofas tend to have an elbow that usually has more seating space than most people know what to do with. This area also attracts the most attention from guests, which is why it makes sense to stuff three or four throw pillows in this area to more visually pleasing.

Stuff Only the Corner 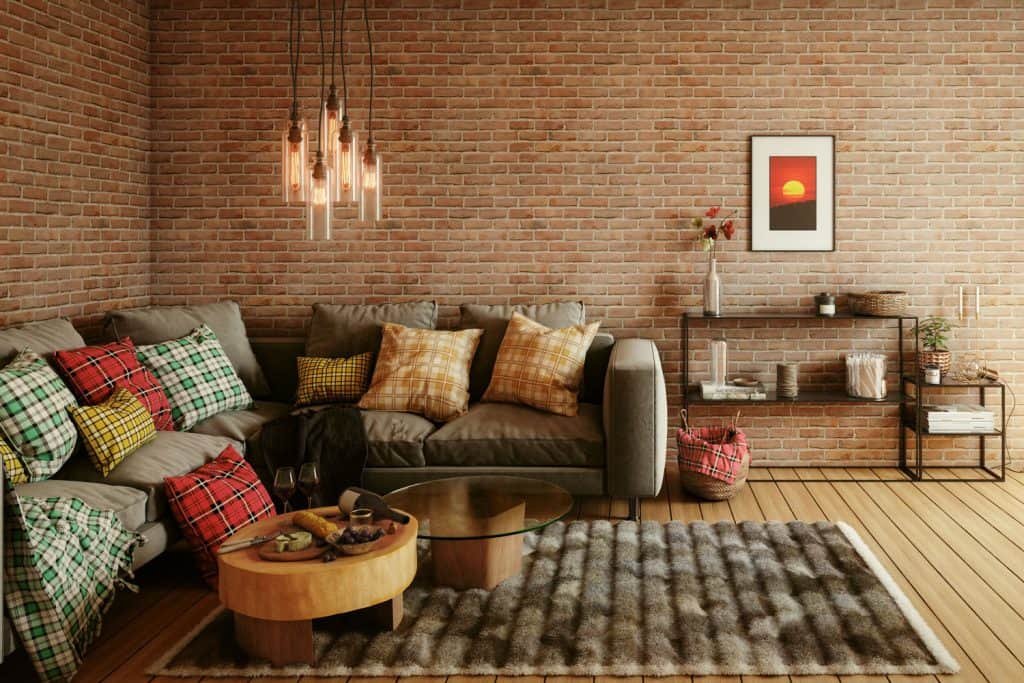 Another great idea is to go stuff throw pillows on one area of the sectional couch or corner sofa. As illustrated in this example, all throw pillows are concentrated solely towards the corner. This is a great way to save both space and personalize your couch. Add in a throw blanket for extra design points.

The medium sized throw pillow can have any pattern, including animal prints and floral embroidery, this entirely depends on the color of the sectional sofa. The idea is to choose a pattern and color palette that complements the sectional sofa. Take a good cursory glance at the pillows to see if the interior décor comes together. If you’re unsure, try placing different patterns and colors at the same time, and then remove the ones you don’t want on the sofa.

The two interest pillows should be nestled in the center of the couch. Their purpose is to connect the line of pillows and bring the arrangement full circle. Depending on the size of your sectional sofa or corner couch, you might need one or two interest pillows. If done right, the method can create a very rough symmetry that will draw your attention and create a more coordinated and planned look.

It’s not always a good idea to create a strictly balanced look, it dulls the mind. Instead, a slight deviation from the color schematic can go a long way in adding charm to your room. In which case, it is always helpful to include an odd throw pillow in any arrangement. A fun accented color with a weird shape (think triangular or round) is always a fun way to spruce things up.

If you can go bold by completely switching the color palette, then don’t hesitate to do so. Throw pillows harmoniously fit in with just about any color palette even if they share nothing in common.

If you’re running out of ideas, try to go completely berserk with all your throw pillows. The arrangement doesn’t matter, as long as you’ve scattered the pillow far enough to enable their individuality to pop out. Throw what sticks, and if it doesn’t work, just swap it out with a different design. 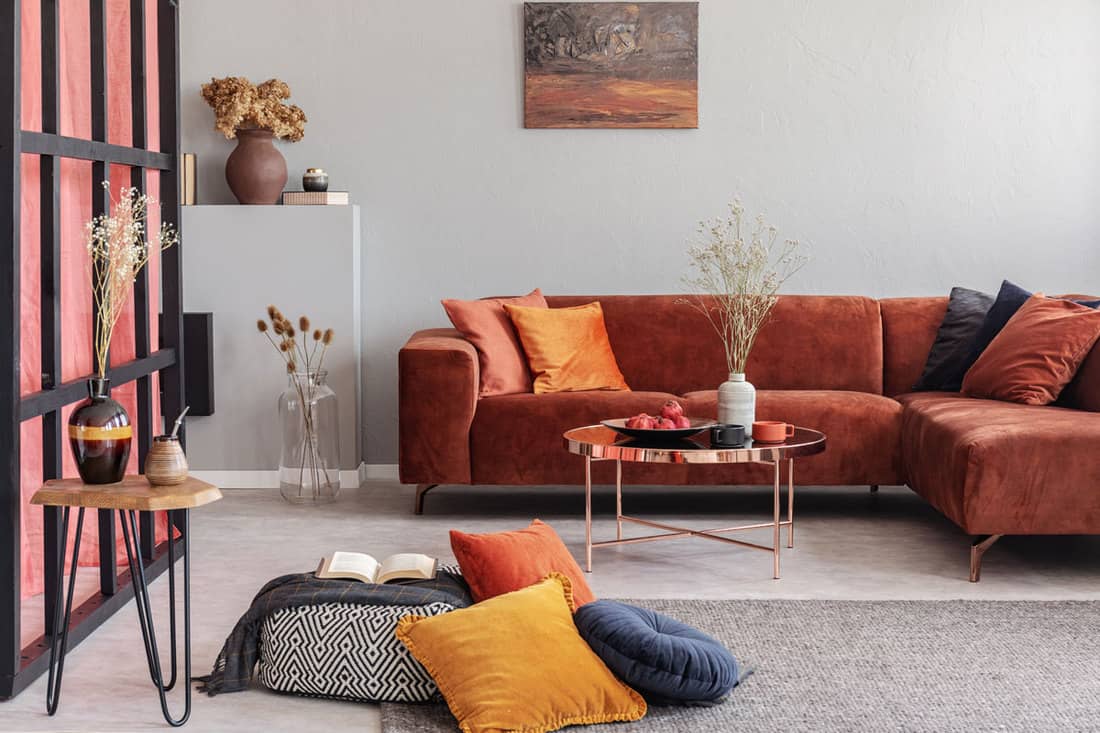 Better yet, bulk order two different patterns and place them with an alternating arrangement. This way it will look like you planned and coordinated more. Don’t overstuff the sectional or corner sofa with too many throw pillows otherwise the design will fall out of place.

Just a Few Will Do

If you’re the kind of person who thinks it’s overkill to get more than two throw pillows, then that is a good design choice too. There is no one size fits all rule when it comes to home décor. Choose a few, but choose wisely. In this example, both throw pillows have accented patterns that complement the chocolate palette of the sectional couch.

Length of the Sofa 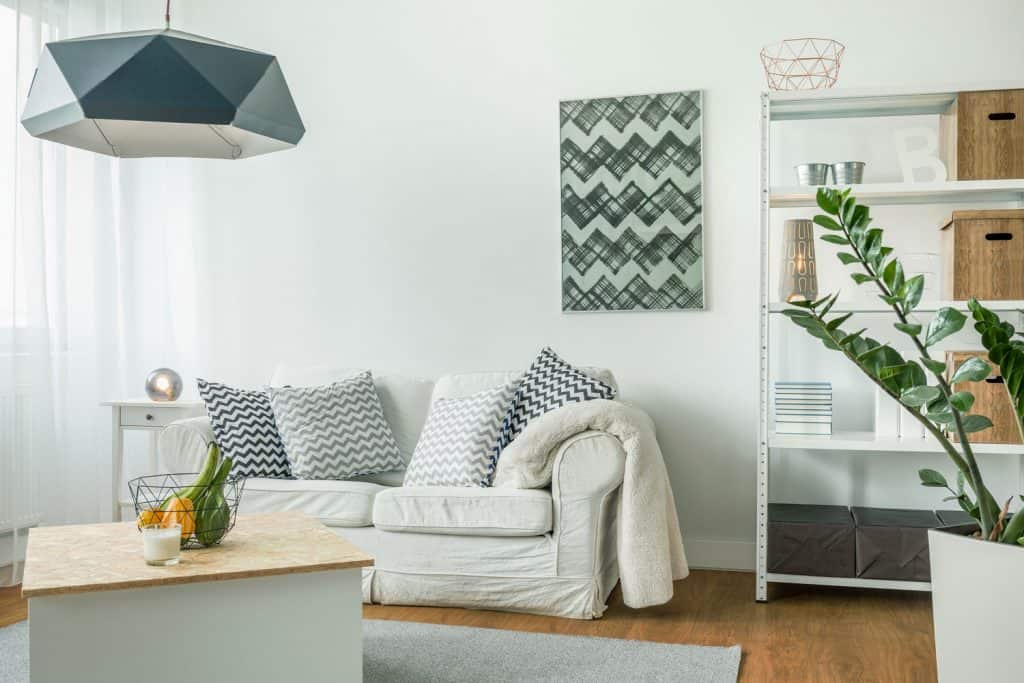 It is common to choose enough throw pillows that they will fill the length of the sectional sofa itself. This is a good idea because it gives each guest something comfortable to snuggle with and complements the décor too. You don’t have to choose the same motif or pattern, you can always diversify for interesting results. 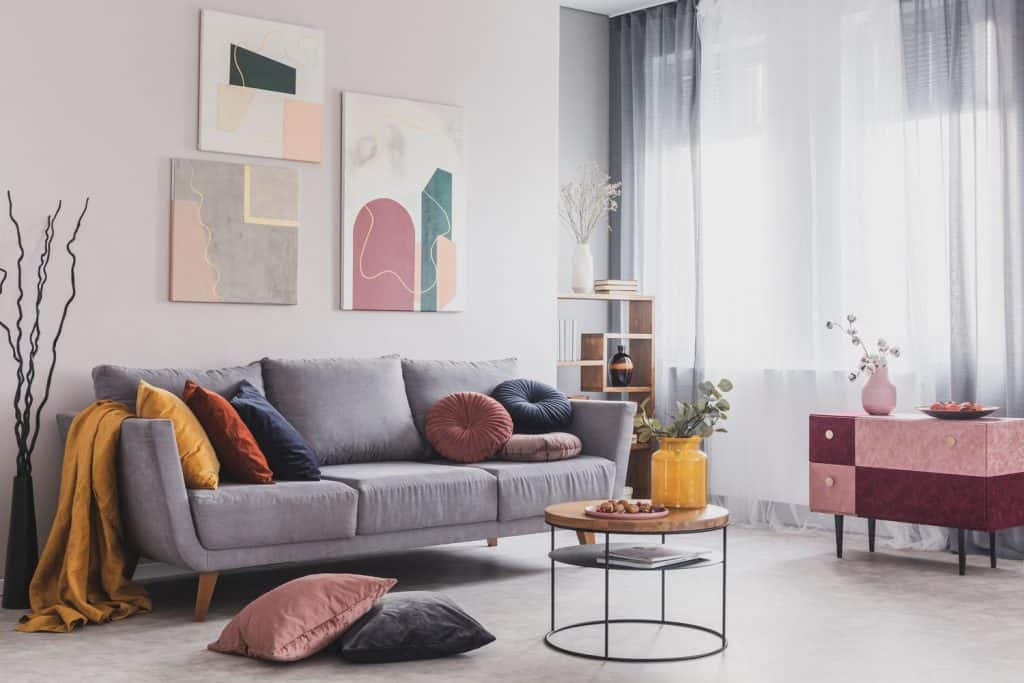 Bold colors are always pleasing visually and add lots of character into the room. This of course, only works if the sectional sofa itself has a neutral color palette. If you have a similar arrangement as shown in this picture, then go with throw pillows that have vastly contrasting motifs and patterns. 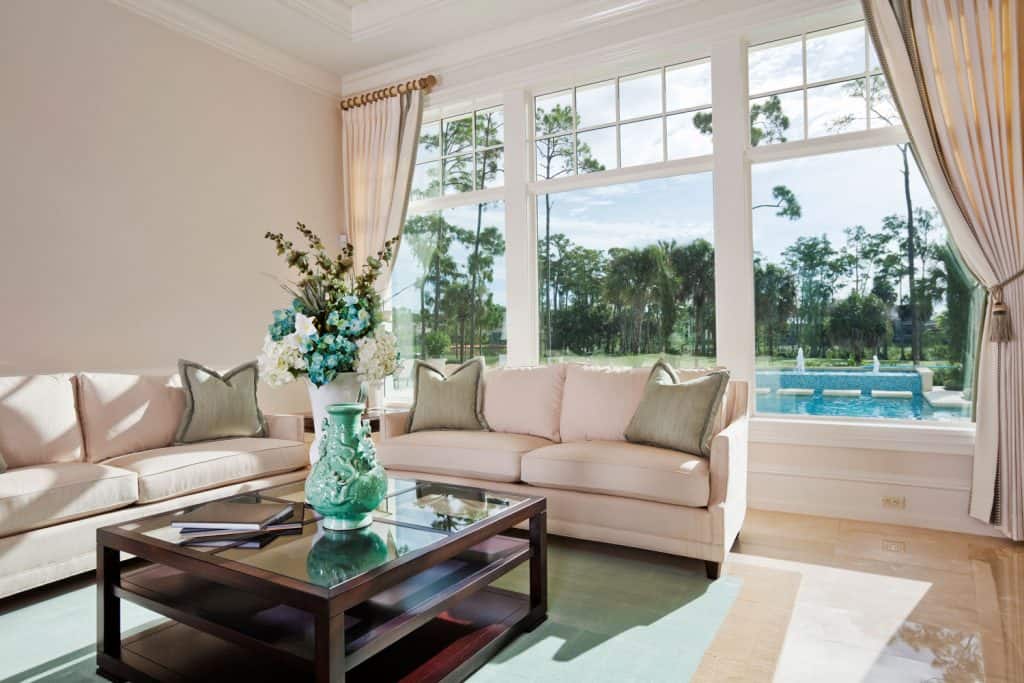 If you have a large sectional sofa with lots of space, follow the directions at the beginning of the article, but instead of choosing five or six throw pillows, choose as many as will fit the length of the sofa. Make sure the base pillows on either side of the sectional sofa have complimentary colors for the best results. 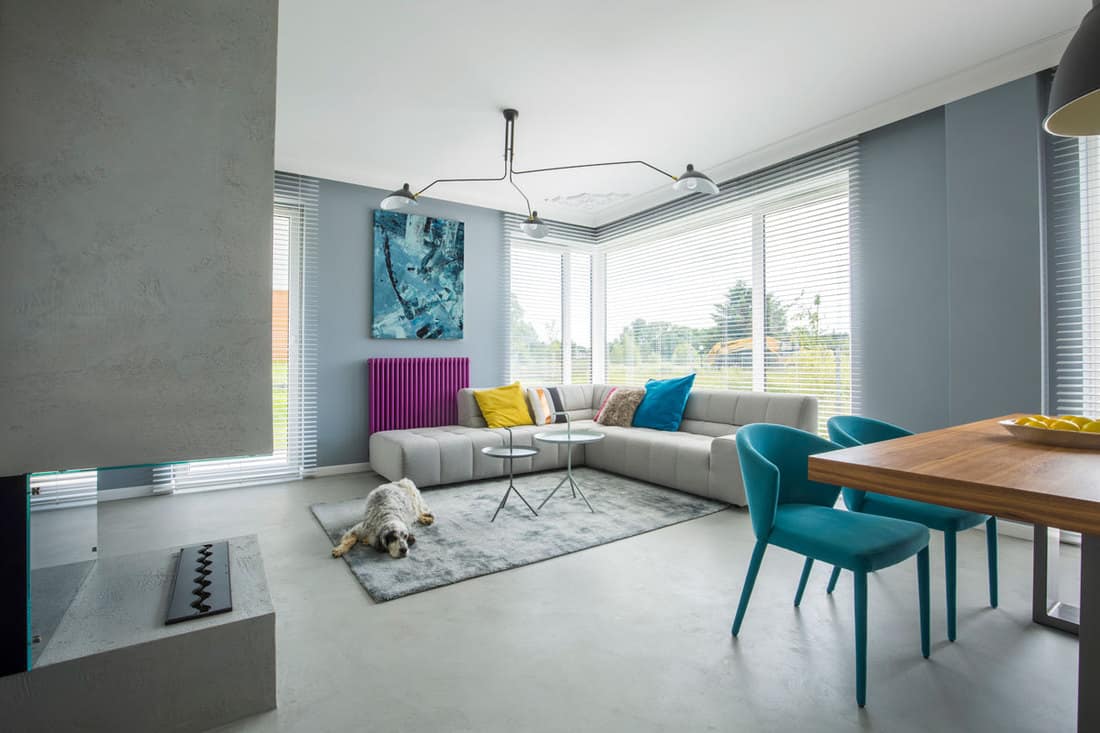 Alternate between throw pillows and empty spaces to maximize both comfort and aesthetics, this only works if you have a large sectional sofa and fewer guess. Make sure the throw pillow has a design that complements the décor.

Use eight throw pillows to personalize your couch, but this only works if you have a large sectional sofa to accommodate the numerous throw pillows. One can’t imagine overstuffing a smaller area with eight large throw pillows. Once again, make sure the color palettes are synchronized with each other.

Use Only 2 Throw Pillows

More is not always better, and you can make do with as few as two throw pillows. Just make sure they have the right color palette to contribute to your room’s design.

Stuff both corners of the sofa with as many throw pillows as you can gather, leaving an empty space sandwiched in-between. This is a great way to maximize both comfort and aesthetics if there are very few people in your house. If the sectional sofa is tiny, this could be a  way to make your very own ‘throne’.

If you fear adding a bunch of throw pillows will make everything feel crowded, then choose one big throw pillow to compensate that can fill in the spaces. You can try to arrange a smaller throw pillow next to the big pillow to take things up a notch.

Or Ignore What We Said

If you don’t care about the arrangement of the throw pillows, then simply toss them where you like. This of course, only works if the sectional couch has a bold color to transform the living spaces on its own. The sofa is fairly oversized, plump, and doesn’t need help from throw pillows. 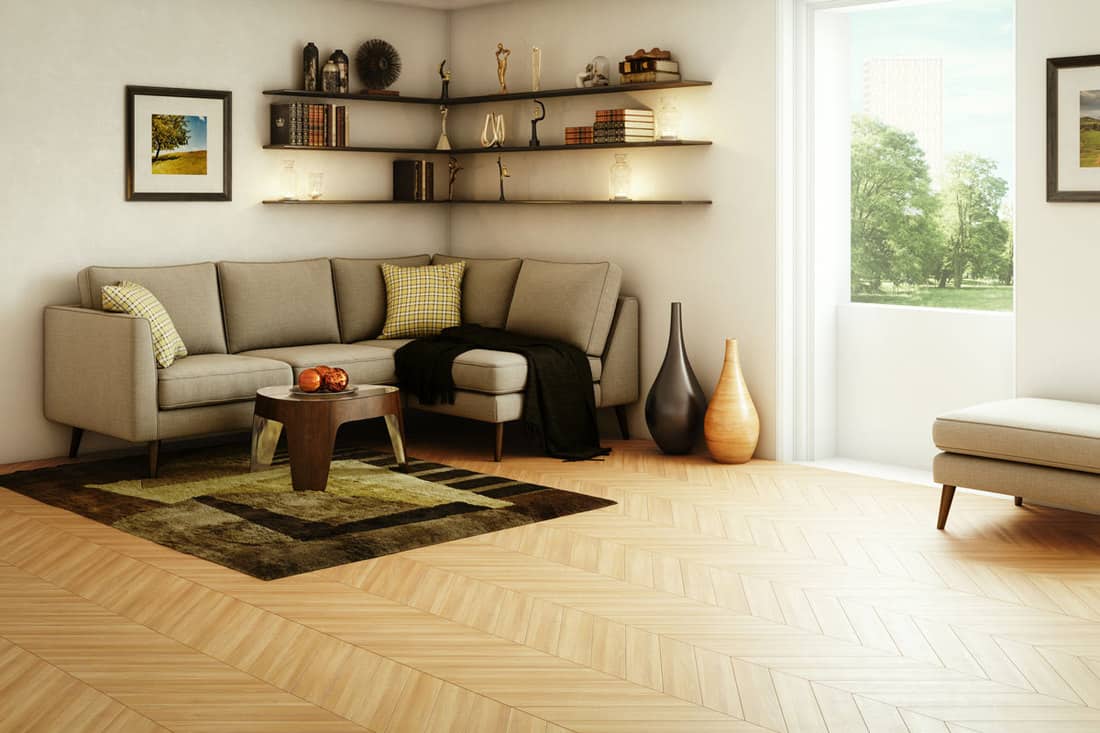 If twos, threes, and fours won’t do, then take it up a notch with five. Five throw pillows of varying sizes and colors will easily transform your space in accordance with your design goals. Notice there is still space in the middle for two people to comfortably sit into.

Go with the Flow

You don’t have to follow any specific rules, as we said; there is no one size fits all rule that governs sectional sofas and throw pillows. You can make do with as little as four small throw pillows on a massive sectional sofa and it will still look perfect.

What about the furniture next to your couch? Click here to find out whether the coffee table can be higher than the couch. You may also find these posts interesting –

How To Decorate A Gray Couch (Throw Pillows And More)

Do Throw Pillows Need To Match?

Throw Pillows For A Black Leather Couch [Which Ones To Choose? Inc. 25 Examples]