A shower liner is a sheet that goes inside the bathtub to prevent shower water from getting onto the floor. The shower liner also protects the shower curtain and prevents mildew from growing. A shower curtain goes outside the liner, and it provides privacy and decorative value.

If you still have some questions about shower liners and shower curtains, don’t worry. In this guide, we’ll explore this topic in more detail. Just keep reading! 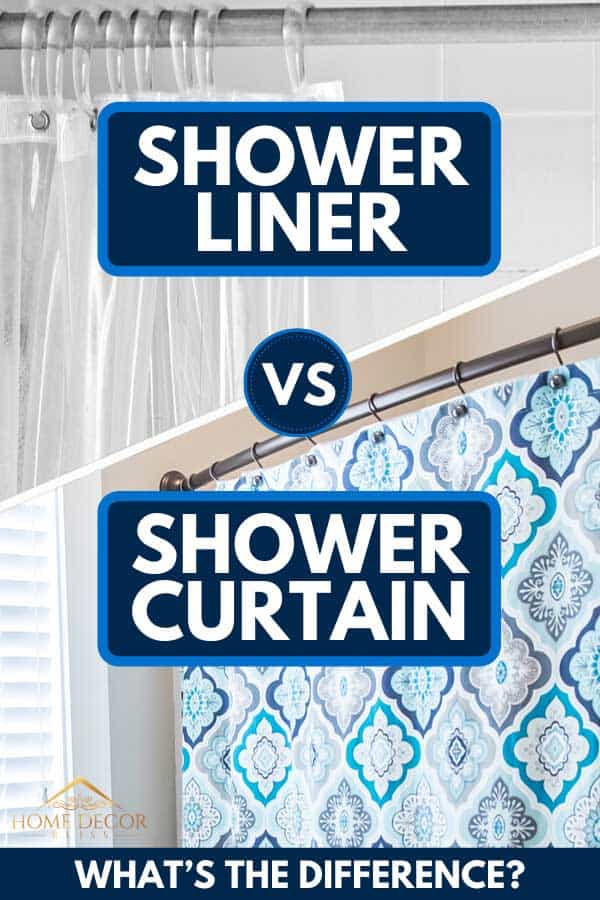 Do You Need A Shower Liner With A Shower Curtain?

It depends on what kind of shower curtain you have! Regardless, a shower liner brings a lot of benefits to your bathroom. A liner preserves the life of the shower curtain because it deflects the water, preventing it from getting wet.

The two most popular materials for shower liners are plastic and fabric. Each has its benefits—more on the differences between the two later. There are shower liners on the market that have fun patterns and designs if you don’t want an ordinary one. No matter what decorating style you have, there’s a shower liner that will fit right in.

If you’re worried about your shower looking too ordinary, this plastic shower curtain liner comes in multiple colors so you can spruce up what might otherwise be an eye sore.

If you care more about appearance, you can’t go wrong with a fabric shower curtain liner. The fabric repels water and dries quickly.

What Kind Of Shower Curtain Does Not Need A Liner?

Vinyl and some polyester shower curtains typically do not require a liner. That is because these materials are already water-resistant. However, if you want to ensure that water doesn’t spill out onto the bathroom floor, the addition of a liner would be a good option.

Many of these types of shower curtains feature weights or suction cups on the bottom hems in order to keep it securely in place. It’s critical that the curtain stays in place to avoid getting water all over the floor of the bathroom.

This type of shower curtain is made from an EVA (ethylene-vinyl acetate) blend that’s designed to be waterproof. This shower curtain has weighted magnets located at the bottom hem to enclose the shower when in use. No need to worry about water splashing out.

Can Fabric Shower Curtains Go Without A Liner?

While it’s certainly possible for fabric shower curtains to go without a liner, it is not recommended. Since fabric curtains can retain a lot more water, you’ll want to add a liner to protect it and provide additional privacy. Some fabric curtains do have water-repellent qualities, so be sure to investigate the specific liner in question.

If you absolutely love the look of your fabric shower curtain and don’t want to compromise its aesthetic with a plastic liner, then consider using a fabric liner. A fabric liner won’t draw the eye away from the shower curtain at all and it will serve its purpose.

Is A Fabric Or Plastic Shower Liner Better?

Ultimately, the answer here lies with the consumer; neither is necessarily better per se. Both types of shower liners have their respective pros and cons.

Where plastic liners really shine is in their waterproof quality. Plastic liners are completely waterproof (more on that later), so they will do a better job at keeping your floor dry and your shower curtain protected.

From an environmental standpoint, it’s important to point out that fabric liners can be washed when they become dirty, which reduces the amount of waste produced from replacing a plastic liner once it gets soiled.

No matter which type of shower liner you select, you should regularly clean it. If it’s a plastic or vinyl shower liner, give it a good scrub with soap and water every once in a while. Even if the liner is advertised to be mildew- and bacteria-resistant, you’ll want to do this. If it’s a fabric liner, then you can throw it in the washing machine for a quick cleanse.

Can I Just Use A Shower Curtain Liner Without A Curtain?

If you’d like, you certainly can use a shower liner without a curtain. However, it’s important to remember that one of the primary purposes of a shower curtain is to provide privacy. So, depending on your living situation, bear this in mind.

Most fabric shower liners are fairly water-resistant, but they aren’t completely waterproof. These shower liners will repel water to some extent, but they will get wet and retain some water. Thus, if you’re worried about your shower curtain getting wet, it’s best to avoid using a fabric liner.

Is It Better To Have Two Shower Curtains?

Having two shower curtains makes for a unique aesthetic. There are two general reasons you would want to use two shower curtains—you have a large shower area to cover or you wish to design a distinctive space. If you want to make a big impact on the overall look of your bathroom, then this is the way to do it.

With this parted look, you create an intense, dramatic look. It’s certainly captivating, and the immense amount of fabric ensures that water won’t be splashing out onto the floor.

Do I Need A Liner With Two Shower Curtains?

You’ll probably want to have a liner with two shower curtains. You may even want to grab two liners while you’re at it to ensure complete coverage. Each liner can stay pulled behind each shower curtain so that they’re not visible or in the way.

There are two ways to hang your shower liners with the shower curtains. You can either use shower clips to keep the liner and curtain together or you can use a double shower curtain rod. Either one works great, it just depends on what type of look you wish to achieve.

These double glider hooks make it easy to attach both your shower curtain and shower liner—one on each side of the hook. The set of 12 fits any standard shower curtain.

Keep your shower curtain and liner separated with the help of this curved double shower rod. Keeping the two separated will prevent mildew from forming.

We hope this guide has helped you better understand the difference between shower liners and shower curtains. Before you go, be sure to check out these other guides:

11 Matching Shower And Window Curtains Sets For Your Bathroom

How To Use Your Phone In The Shower [Inc. Pocketed Shower Curtain Ideas]