Throw pillows are the most straightforward way to give your sofa an impeccable finish with a designer layout. Then there is the all too familiar question, “how many throw pillows are too many?” Does such a concept even exist? We took on the task of analyzing various examples and figuring out the answer.

Most people use 2-4 throw pillows on an average sized couch. This seems to hit the sweet spot of making the most of accent pillows without going overboard. However, that doesn’t mean there is one right answer. You can use anything from a single throw pillow to a dozen or more. It all depends on the size of your sofa and the design statement that you wish to make. 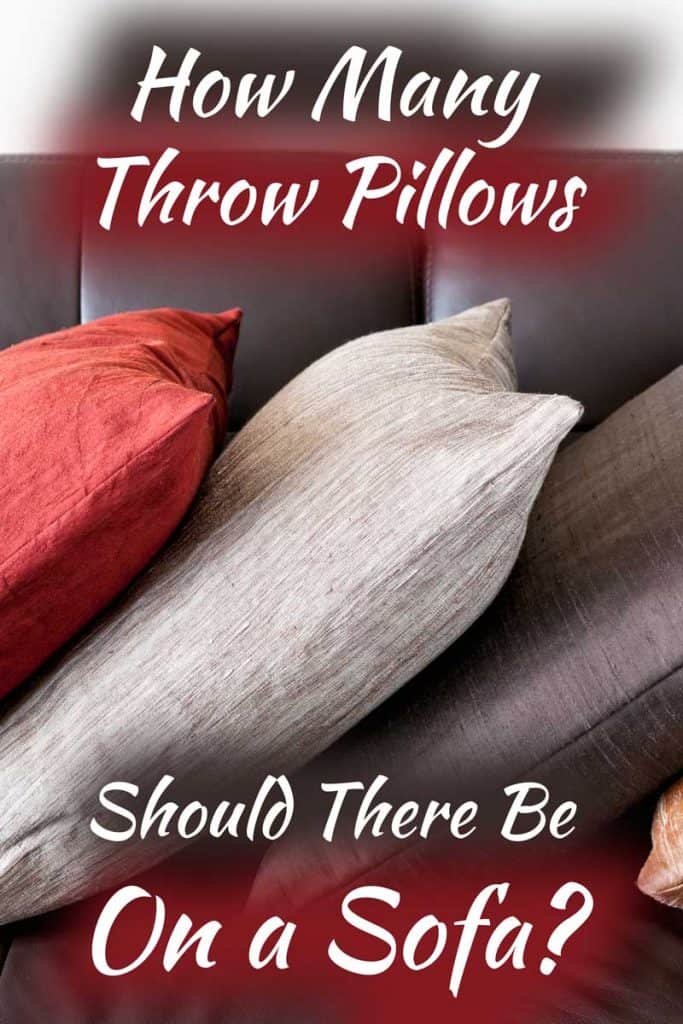 There are almost a limitless number of combinations available which can seem intimidating at first. If you’re unsure where to start, we’ve taken the gargantuan task of giving you a complete bird’s eye view of the basics to help you stylize your sofa exactly how you envision. Read on for a long list of examples – from just one throw pillow to a dozen!

Just the One Will Do

It’s almost unheard of these days to make do with a single throw pillow. It is cultural to stuff as many throw pillows one can reasonably muster into a small space. The idea is to uplift the aesthetics using the power of numbers. Quite the contrary, however, a single visually appealing throw pillow can visually transform your room, but it requires some strategy. Let’s explore a few examples.

The Sofa Can Only Fit One

If the sofa can’t accommodate more than one throw pillow, then it should be a valid enough excuse to not go overboard, it’s a simple rule of thumb. Excessiveness does not look good and is hugely impractical, sacrificing both aesthetics and functionality.

You don’t need to play a numbers game with throw pillows when the aesthetics are visually striking, relatively speaking. Not every person will have the taste for the aesthetics that sugar skull throw pillows offer, but you get the idea. Experiment with bold colors, designs, and motifs. Just a single will do.

One Throw Pillow Per Sofa

In this case, you’re using two throw pillows, but you are still following the one per sofa formula. This arrangement works perfectly because of how the throw pillows complement the grey-black upholstery.

You’ll think the spacious sofa will invite more throw pillows, but no. The designer recognizes that one’s just fine. Bonus points because the colors are approximately the same.

There is no one size fits all rule when it comes to throw-pillows, it doesn’t hurt to go up a notch with the numbers. After all, they won’t be breaking the bank.

Taking Advantage of the Open Spaces

Just two throw pillows minding their own business, sitting across a spacious couch. The designer could go overboard but chose not to. It’s because the orange motif of the throw pillows strongly contrast the neutral color palette. In fact, the throw pillows are so effective that they’re the first thing you notice about the room.

Don’t be afraid to explore your room’s potential by cramming more throw pillows than necessary. It only works if you don’t plan on using the spaces for seating arrangements. You could also use them to bolster your comfort and provide support to your back when watching TV or reading a story.

Three Throw Pillows – are you playing with fire?

As the famous saying goes, three’s a crowd. Three is a crowd pleaser and will get noticed anywhere you go. There’s no reason not to capture the elegance of a set of three accented pillows. You can have two on either corner with the third one resting in the middle. Or you could toss them all in one corner and call it a day – your choice.

This room looks like it was pulled out of the Victorian era, everything is so… ornate. The tufted couch is complemented with three accented throw pillows, with two on either corner and one cylindrical throw pillow to bridge the gap. It’s an effective arrangement and there’s no reason not to try replicate it.

We just couldn’t help ourselves here, those three accented pillows are nestled close to each other, protecting the corner from intruders. It’s a great set up.

Who needs four throw pillows anyway? Don’t they take up precious space and restrict mobility? The answer is a mixed bag between a yes and no. Four throw pillows can actually make your room look fantastic if the room is large enough and there is enough space to accommodate them all without cramming them. It is in fact, the most common arrangement preferred by designers.

These Four Do a Good Job

The four throw pillows have absolutely nothing in common with each other, yet they do a great job of sprucing up the décor. They take the best bits from each other and complement them with their own unique motif. The best part is that there is enough space for a person to sit without disturbing the harmony.

A great idea is to purchase two sets of two throw pillows that have the exact same design theme. They should ideally possess a motif that contrasts with the sofa’s slipcover, but that is not important, as illustrated in this example.

You can create a versatile foundation for your sofa and then complete the entire arrangement with a plush throw blanket. The base pillows should have a texture that plays along with the slipcover of your sofa in an interesting way.

Now you’re playing with some serious firepower. Five throw pillows will instantly grab attention. Whether they do positively or negatively is a completely separate issue.

Being Different is Good

All give throw pillows feature different patterns that lend a very subtle summery vibe to the black sofa and tie perfect with the room’s décor. This arrangement is made possible thanks to the spaciousness of the sofa. Make sure to look for a throw pillow that complements the hues of the sofa’s slipcover.

To make complete the room’s aesthetics, you can choose a smaller, more standout pattern or texture. Think digital print, broidery, metallics, or whatever have you. In this case, it’s a print of a bike. It makes no sense, but it looks ridiculously cool, adds interest to the room, and balance to the overall arrangement.

Now you’re really cranking things up. But if you play around with the colors just right, you might be on the cusp of something great. Six doesn’t have to feel overcrowded, if done right.

Yes, the whole sectional sofa is massive, but isn’t that the entire reason why six throw pillow can be arranged in the first place? None of the pillows share common colors, which is a bold decision.

Now we’re teetering on the edge of something new. Very few people can transition from 2 throw pillows to 7 without looking forced upon.

This arrangement works because all throw pillows share the same color pattern. It matches the hue of the overall room and keeps everything cozy. Surprisingly, there’s still enough room to add a few more throw pillows.

Few people use eight throw pillows because it isn’t easy to manage the arrangement with finesse. Only experienced designers can manage something this complex, but feel free to experiment.

We’re treading on shaky ground here, but when done right, 9 is welcome, it is a super popular odd number.

Doing it the Right Way

It’s a welcome sight to see the overcrowded number nine. It’s done to death but very few designers are actually able to make it look right. In this case, the arrangement works perfectly because of the uniformity in design. Surprisingly, there’s room for more.

When you’re using that many throw pillows on a single couch, it’s safe enough to use the term „a dozen throw pillows! Let’s look at some examples.

Switch up the Palette

It’s a bold choice to go with 11 throw pillows, and in this case, it actually works. The throw pillows are tiny in size and share vastly different color schemes that play well with the sofa’s own uses.

What’s your ‘endgame’ design? If you want to push the limits of what can be done with throw pillows, then start with 12 and beyond. It’s the ultimate way to add character and dimension to your furniture.

We always encourage our readers to boldly step into territory that no man has gone before.

If You Count Carefully, There’s 12 Pillows

This doesn’t look forced at all. All 12 throw pillows look perfectly balanced, as all things should be. The textures and motifs per pillow match the larger sofa’s fresh look. It will definitely grab attention and start plenty of conversations.

There’s no Space for a 13th

A clever design that uses alternating colors for a more impactful appearance. The smooth texture and lustrous finish of each throw pillow add a ton of flair to the overall décor, perfectly complimenting the sofa’s own slipcover.

Get creative and find the best number of throw pillows for your couch! And remember that one pillow isn’t like the other (or doesn’t have to be). Check out our post about the 27 types of throw pillows for more inspiration. You’ll notice how some stand out more than others – which means you can have fewer of them for a grander effect.