There’s nothing like stepping into a hot shower with a luxurious tile setting and door. But, you may wonder how high your shower doors can go in your bathroom? We researched the pros and cons of various door heights and settings for average to spa-like showers. Read on to discover amazing home decor ideas for creating a dramatic and practical shower experience.

It is possible to create an enjoyable and relaxing shower experience depending on the size, style, and type of shower doors. Learn more by reading this article about installing shower doors to elevate your bathroom’s style. 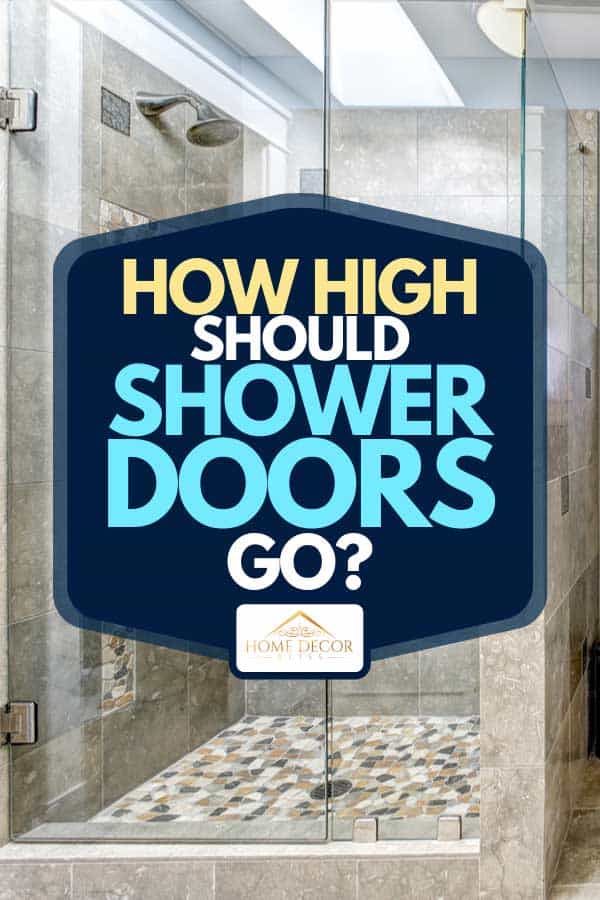 The idea of installing a floor-to-ceiling length shower door is not impossible, but it may not be a practical decor choice for a bathroom. Let’s face it; bathrooms are a moist place with all of the water coming from toilets, sinks, and showers. A bathroom must have adequate ventilation, including a shower design to allow steam and water droplets to escape. In many cases, even if one were to leave the shower door open between uses, a dramatic shower door that stretches from the floor to a tiled ceiling may encourage mold, mildew, and odors.

Typically, most shower doors have a height of 72 inches in length, and the width is usually between 36 to 40 inches. Of course, you may have a custom shower door set up with varying lengths, thickness, and weight. Be mindful that the shower door’s size will be determined by if it is framed, frameless, pivots so it swings inward, outward, or slides to enter. Smaller bathrooms may not be capable of handling a shower door that reaches to the ceiling, but a larger bathroom adjacent to a master bathroom may look stunning with a bold door.

Especially if you choose a shower door that extends itself from the floor to the ceiling, make sure that it is a style that is supportive, functional, and aesthetically pleasing. It may be necessary to choose a lighter, thinner profile door than initially desired for safety concerns. Typically, many contractors may turn down installing such a cumbersome door because there should be space for a shower to breathe, and obstructing vents, fans, or lighting may be in the way of the door.

Where Should Shower Door Be Located?

When installing a shower door that swings, there should be a clearance of 30 inches surrounding the entry point in case of an accident. Smaller bathrooms with a shower in the corner or an oddly-shaped shower may be better off with sliding doors. If a shower door is installed so it swings inward and outward, it is essential that the door not hit any nearby walls, sinks, toilet, or other fixtures.

The shower door position is completely up to the owner, but most doors are situated opposite the shower head and drain. Some shower doors may be placed directly in front of the showerhead and drain or are placed to its left or right for sliding doors. Be aware of where you install a shower door so you can safely and comfortably exit and enter the shower.

Check out this nickel shower door enclosure on Amazon.

Should A Shower Door Swing In Or Out?

It is acceptable for a shower door to swing out or both in and out, but never just in. Building codes require that a shower door open outward, as a door that only opens inward can easily become blocked if the occupant falls.

Do be mindful when a shower door swings outward that there is enough clearance space, a minimum of 30 inches on either side of the door when it is open. You will want enough room so that the shower door can be left open to allow it to dry between uses. If you have a shower door that also swings inward, it conveniently allows water to drip onto the shower’s surface rather than the floor.

Generously sized bathrooms are a perfect fit for a wide door that swings outward without hitting any obstructions. Smaller bathrooms may be better off with a shower door that swings inward, especially if an open door would hit a sink, vanity, or toilet going outward.

Check out this semi-frameless chrome shower door on Amazon.

Check out this pivoting shower door on Amazon.

How Do You Measure For A New Shower Door?

Before you take the measurements for a new shower door, explore whether you will install a frameless or framed shower door. Afterward, you will need to take your tape measure and calculate the width of the entrance. Measure the space between the walls and the top and bottom of the opening. Takedown the numbers for the space between the top of the tub’s edge or the shower floor up to the ceiling. Also, account for how much space the door will take up if it opens outward. Make sure your measurements are within 1/16 of an inch for accuracy.

A shower door should have a good fit for the tub and shower size to prevent water leakage, easy entry, and exit, and reduce the need for adjustments. Most single-style shower doors are no more than 36 inches in width. Frameless shower doors need to be a minimum of 3/8 of an inch thick. Extra measurements may be needed for an angled shower door set up for a shower in a corner or one with an odd shape.

Check out this chic sliding shower door on Amazon.

Bathrooms that are grand in size with plenty of room to spare look amazing, with a shower door extending from the floor to the ceiling. However, it is not always practical or feasible to install a shower door at such lengths. Some contractors may dissuade someone from choosing a shower door that touches the ceiling. Smaller bathrooms can have dramatic doors that reach the ceiling, as long as they pivot inward to enter and exit the shower. Showers with a weird shape or are at an angle in a bathroom may be better off with a gap between the ceiling and the shower door.

Most shower doors allow for a modicum of space between the ceiling and shower, even if the ceiling above is tiled. Ventilation in the bathroom allows steam and moisture to escape while showering and reduces mold and mildew buildup. Remember, the size of your bathroom, the layout of surrounding fixtures, and whether your shower has a fixed door, framed, or frameless style will influence your door choice. Most doors will have a thickness between 3/8 of an inch or 1/2 inch for stability, and the width of average shower doors rarely extends beyond 36 inches.

How Much Does It Cost To Replace A Shower Door?

How Long Do Showers Last?