If you’re installing your own shower head and shower controls, it’s important to place them at the right height. Installing them incorrectly can lead to years of frustration and annoyance. How high should you install these devices to best serve everyone in your home?

These numbers are not concrete and should be based on your household situation. We’ve looked at all the aspects of choosing a height for your shower head and controls to help you make the best decision possible.

Read on for more information on measurements, types of showerheads, and how to make your shower work for you! 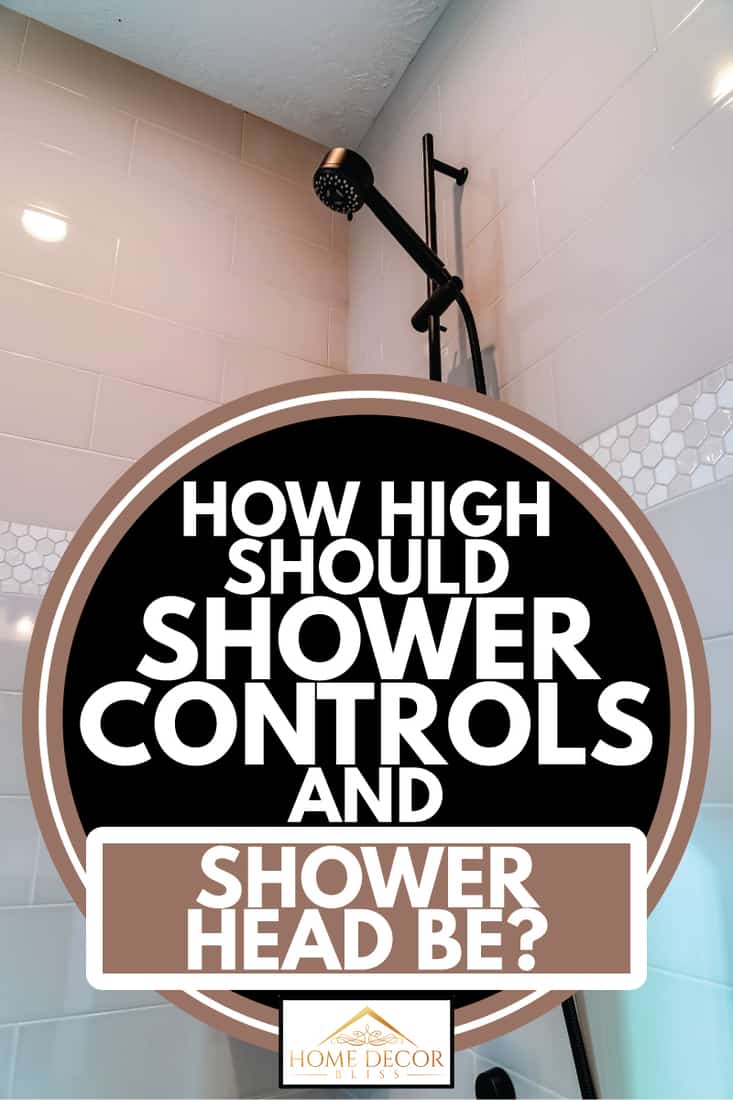 It is widely recommended that the showerhead be installed around eighty inches above the floor. This should accommodate most people and households.

This measurement should be taken from the finished floor to the center of the location where the shower arm meets the wall.

However, the height of the showerhead is flexible and should be determined by your home’s needs. If you have a person who is above-average in height, you should plan on installing it higher than normal.

The National Kitchen & Bath Association provides this chart for shower head height based on users‘ height.

While these guidelines are helpful, they are not set in stone because there are other things to consider.

If you have multiple people of varying heights in the home, average the heights and choose the appropriate height for the average while ensuring that the tallest person will not inadvertently hit his or her head on the showerhead.

It is also best if the water naturally hits the user’s upper body when standing in the middle of the shower (or one-third of the way back in a shower/tub combination). This makes it, so the water is not falling on the person’s head and face constantly while they are showering, but they can still put their head underwater to rinse and clean.

Pay attention to your shower head’s packaging instructions, as it might have details specific to your product.

Should shower head be centered?

The shower head should be in the horizontal center of the shower. This is for aesthetics, as well as ease of use. It should not necessarily be centered vertically, as the height should be based on the above guide.

If you’ve moved into a new home in which the shower head is too low, there are ways to adjust the height without changing the location of the shower head installation; consider buying an „S“ shower arm extension like the one below.

Click here to purchase this „S“ arm on Amazon.

This device will raise the level of the shower head without having to change the internal plumbing.

The shower controls (also known as the shower valve) should be 38 to 48 inches off the shower’s finished floor.

This might change, however, if the valve controls both the shower and bathtub. In this case, you want the user to be able to reach the valve from a seated position in the tub. Place the valve between eight and eighteen inches above the bathtub faucet at a height that makes sense for your situation.

Some experts would say that the shower valve should not be centered with the showerhead; instead, it should be offset so that you do not have to reach through the shower spray to adjust the water while standing in the shower. This is for the sake of convenience and safety but might make the shower look sloppy or poorly done.

The vast majority of shower valves made after the 1920s have regulators in them to keep the water from becoming a dangerous temperature. If the cold water running to the shower fails for any reason, the water will immediately turn off.

This safety feature makes it less important to reach the shower valve without reaching through the water since most showers are unable to get to scalding temperatures.

Wondering what type of finish you should use for your shower? Read this article for great information on all your options!

If you have various heights in the home, you might consider purchasing an adjustable shower head. Some shower heads are attached to a vertical pole and can be slid up and down the pole depending upon preference.

See how you can adjust the height of this KES Slide Bar shower head?

Click here to purchase this shower head on Amazon.

Many times — like in the product above — the adjustable head is removable and can be used as a handheld sprayer.

What is the standard height of a rain shower head?

The appropriate height of a rain shower head is widely considered to be 84 inches off the ground.

Rain shower heads are designed to make the user feel like they are standing in the rain with the water coming down from the ceiling. They provide water coverage for people of all heights as long as the shower’s ceiling is high enough. Eighty-four inches is seven feet off the ground, plenty high for the average person.

This is a great example of a rain shower head that you can purchase and install easily:

Click here to purchase this shower head on Amazon.

Click here to purchase this combination shower head on Amazon.

These devices should be installed low enough that members of the home can reach the handheld device.

Redoing your entire shower? Check out this article for more information on what materials to use.

How high should tile be above shower head?

The ceiling above a shower should be anywhere from eight to ten feet off the ground, making it three to five feet above the shower head. This depends upon how high the shower head has been installed, of course.

The ceiling or tiles above the shower head should be painted or covered with an oil-based glossy paint. Otherwise, the steam and moisture produced by the shower can damage the ceiling.

This product contains an element that blocks mold and mildew, perfect for areas around the shower.

The height of your shower head and the valve is up to you but should be based on the height of those who will be using the shower. Typically, however, the shower head should be around eighty inches above the ground, with the control somewhere between 38 and 48 inches high. This changes if the shower is also used as a bathtub, in which case you should place the valve eight to eighteen inches above the bathtub faucet.