You’ve got friends that rave about them, and now you’re considering adding a corner shower bench in your own home’s shower. Since this is your first time tackling this sort of project, you want to make sure you’re entirely aware of all the ins and outs, especially when it comes to selecting the right one for your shower. Just how big should a corner shower bench be? We committed ourselves to extensive research on shower benches from various professional sources and consumer forums and present our findings ahead in this post.

The recommended size of a corner shower bench is between fifteen and sixteen inches deep and eighteen to twenty-four inches wide.

Now that you know the recommended dimensions for corner shower benches, you probably have additional questions about this popular shower accessory.  Keep reading to find out the advantages and disadvantages of both large and small shower benches, how big your shower should be to accommodate a shower bench and more. 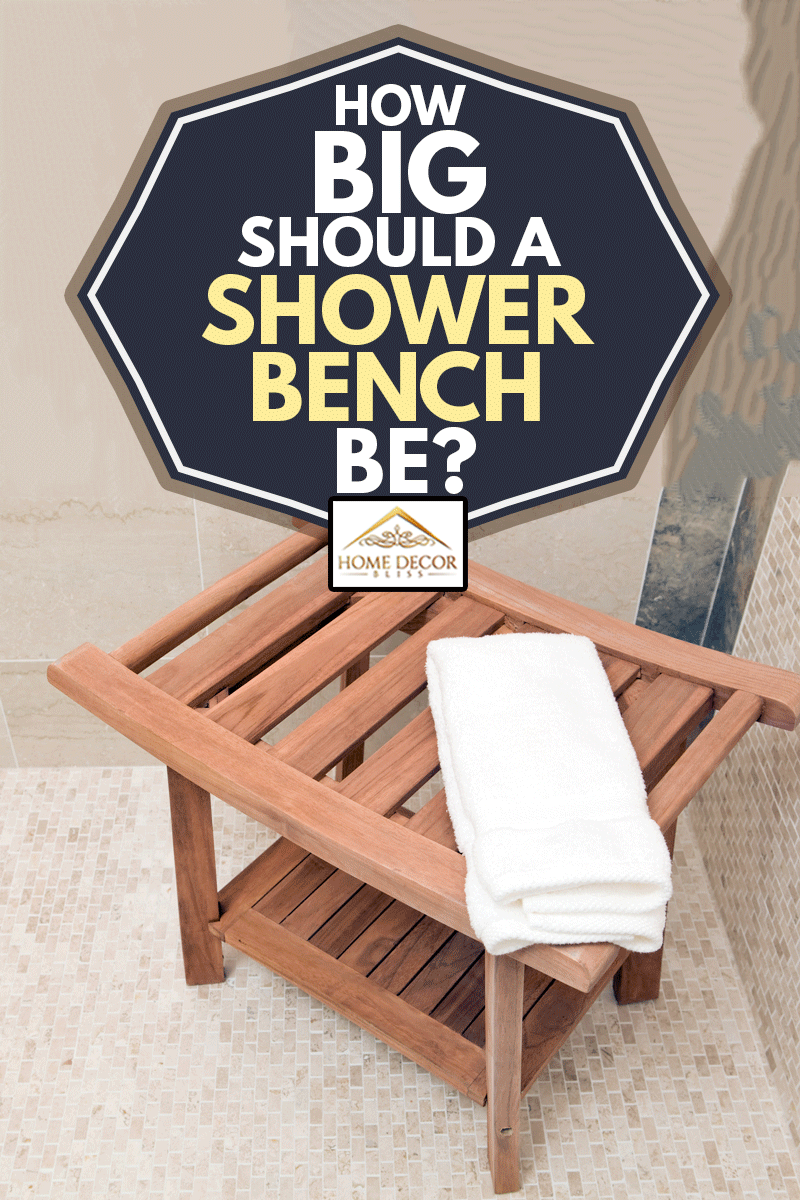 Advantages and Disadvantages of Large and Small Shower Benches

Making sure that you have the right size shower bench for your needs is essential. Selecting a size that you might later regret can be a real inconvenience to remedy, so before you commit yourself to one particular size or model, read to see what our research has revealed.

Using a small shower bench has the chief advantage of being placed inside any home shower. Smaller benches allow for much more maneuverability and make for a more comfortable showering experience in even the smallest of showers.

If you want a smaller bench, it’s essential to be aware of your shower’s size, the size of the people that will be using it, and the users‘ mobility. Not considering these critical variables can result in you or someone in your household not being satisfied with your purchase.

To see this brand of small shower bench on Amazon, click here.

These disadvantages can be circumvented if you choose a larger shower bench that is folding. Even in the smallest of showers, you’ll be able to comfortably sit on your shower bench and then stand and shower like normal after folding the bench back into place. This style of shower bench works well for larger people and small showers.

How Big Should A Shower Be To Have A Bench?

The last thing you want to do is purchase a shower bench and have it installed, only to discover that it’s uncomfortable to maneuver around while it’s not in use. Knowing your shower’s dimensions and the limitations is vital in selecting the right style and size of shower bench for your home’s shower. But before we discuss that, let’s look at what standard sizes are for home showers.

The good news is that no matter your shower’s size, you’ll be able to find a style and model that will fit. For the smallest showers, consider a foldaway model. This will allow you to collapse it against the shower wall when not in use.

A shower that is a minimum of thirty-two inches by thirty-two inches or larger will be able to fit a larger shower bench comfortably. Whether your chosen model is removable, can collapse, or is built-in, a thirty-two-inch width and length is suitable.

To see this removable shower bench on Amazon, click here.

To see this folding shower bench on Amazon, click here.

Does A Shower Bench Need To Be Sloped?

While it’s not necessary to slope a shower bench, doing so has its advantages. A shower bench with a completely flat surface will allow water to stay pooled on its surface until it evaporates. This pooling can wear through the finish on wooden shower benches and can lead to unwanted mildewing over time.

Having a shower bench with a little bit of slope will let the water drip off of the bench and onto the floor of your shower. Your shower or tub floor is also slightly sloped, for the same reasons.

How Much Slope Should A Shower Bench Have?

How Do You Waterproof A Shower Bench?

Thankfully, you won’t need to waterproof most shower benches. The vast majority of models have been waterproofed by the manufacturer, so doing it yourself isn’t necessary.

In this post, we discussed the advantages and disadvantages of both large and small shower benches. The research we performed showed that no matter what size shower bench you have, it’s best to have one with a slight slope to it so that water doesn’t stay pooled.

We also learned that corner shower benches will fit into almost any size shower, but larger corner benches are always better in showers that are at least 32″ by 32.“

Hopefully, you are now armed with enough knowledge to make an informative decision on what size and style shower bench you will add to your home’s bathroom.

If you found this post on shower benches to be informative, we think you might enjoy reading the following posts listed below:

How Much Does A Shower Bench Cost?

Can You Heat a Shower Bench?

Can A Bamboo Bench Go In The Shower