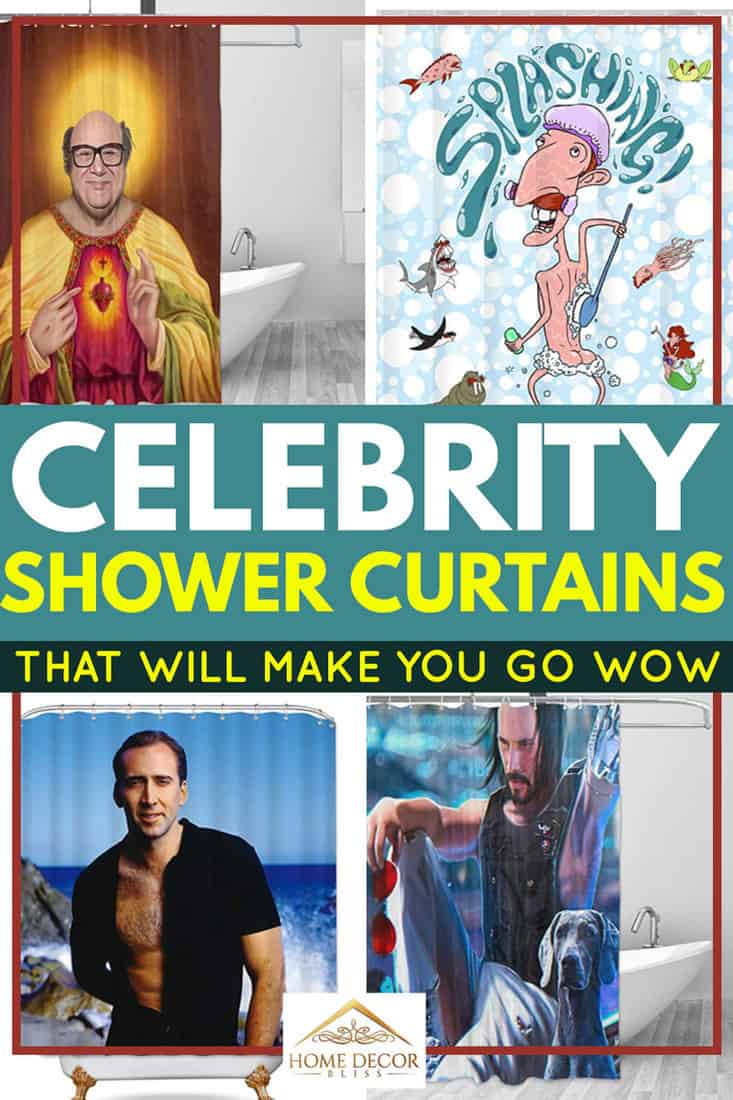 Who knows, a shower curtain featuring a movie star makes for a delightful collector’s item,  or it may fit seamlessly into a bathroom with a theme revolving around a particular decade. The choice is yours, and there are some eye-catching shower curtains capturing closeups of celebrities you know and love. Keep reading to check out the red carpet line-up of shower curtains, and transform your bathroom into something magical. Don’t forget, celebrity shower curtains also make a fun gag gift or the perfect gift for a die-hard fan of a particular actor.

Celebrating the holiday spirit is welcome year-round, and you can make it possible with this tasteful shower curtain featuring Jeff Goldblum donning a Santa hat. Actor Jeff Goldblum strikes a pose and shows off his handsome face on a fast-drying, thick waterproof fabric curtain.  Stay entertained while you shower; this curtain features nine buttonholes, 12 hooks, and does not stick to your body while you wash.

Check out this holiday-ready shower curtain on Amazon.

The Wild Thornberrys wouldn’t be complete without Nigel Thornberry, who is voiced by actor Tim Curry.  Sir Nigel Archibald Thornberry was born of English aristocracy, and he is a fictional animated character who travels the world documenting wildlife with his eccentric family.

Make a splash with this riveting and colorful shower curtain featuring the memorable and unconventional Nigel Thornberry on the front. Nigel is known best for his exploits capturing wild animals on camera, and he is surrounded by a menagerie of characters while shown scrubbing his backside.

Before Nicolas Cage became a household name renown for his roles in films like Face/Off, Lord of War, and Ghost Rider, he first acted in a school production of Golden Boy. As an actor, Nick is fascinating because of his method of acting and getting into character for his film roles,  which he has coined Nouveau Shamanic.

Nicolas Cage takes a slightly sultry pose on this polyester shower curtain with a splashing wave and rocks behind his frame. Keeping this waterproof and eco-friendly shower curtain clean is easy, throw it into the washing machine. Install this curtain seamlessly on straight or curved shower curtain rods, and make your bathroom the talk of the town.

Keanu Reeves may be a Candian citizen with a Hawaiian name, but the actor was born September 2, 1964, in Beirut, Lebanon. Keanu used to be a goalie playing hockey, dropped out of school so he could pursue acting, and became a household name for his roles in Bill & Ted’s Excellent Adventure, The Matrix trilogy, and the action flick, John Wick.

Save the world while you start your day with a fun shower curtain featuring none other than actor Keanu Reeves. Hold onto your soap and enjoy checking out the artistically rendered image of Keanu Reeves printed on the front of the shower curtain. The waterproof curtain is non-vinyl, comes with 12 plastic hooks, and is quick to dry.

If a picture says a thousand words, this printed image of Jack Nicholson’s remarkable mug speaks volumes. Anyone who is a fan of Jack Nicholson for his more award-winning performances of unhinged characters will appreciate this unique, waterproof shower curtain made from 100% polyester.

Actor Danny DeVito may only be 4 feet 10 inches in height, but today he boasts a net worth of over 70 million dollars. Before Danny stuck paydirt with acting roles like The Penguin in Batman Returns or starred in the television series, It’s Always Sunny in Philadelphia; he worked at his sister’s hair salon for a year-and-a-half.

Feel the sacred heart of Danny DeVito as the actor is depicted with his signature spectacles, dons a saint-like robe, and points his finger to his chest.  The shower curtain is waterproof, soft, and porous to allow for good air circulation. Grab this durable shower curtain as a colorful and humorous gift for birthdays, Danny DeVito fans, and anyone who likes tongue-in-cheek jokes.

Ditch the shower curtain liner and stay mesmerized by this strong, waterproof fabric shower curtain featuring a floating head of Danny DeVito with rainbow-color letters.  Have a blast while in the shower when you have this fanciful and fantastic shower curtain where Danny is the center of the universe, surrounded by stars. The drape is soft, permeable, and suitable for anyone with a larger-than-life personality.

Let’s face it; celebrity shower curtains make amazing conversation starters; and, design-wise, they offer something different aesthetically than curtains with busy, graphic designs or simple, neutral-colors. Inject a little humor into your life, or gift someone you love with a celebrity shower curtain featuring artistic renderings of some of Hollywood’s most memorable actors. Decorating the shower and gathering bathroom accessories are too often a last-minute decision, so why not brighten up the mood with a celebrity? You might be surprised how much fun shower-time can be with a star on your side. Don’t worry, what happens in the shower stays in the shower.