If you have a black leather couch in your home, or if you’re considering buying one, you know how versatile and stylish they are. But then you run into a problem when you go to pick throw pillows.

Are you stuck doing plain white? Do you need to match the material? Is it going to overwhelm the awesome look of the couch if you do something bold? Can the color throw pillows add break or make your living room?

No worries! We got you covered with the best throw pillows and black leather sofa combinations!

A black leather sofa is a jack-of-all-trades in the design world and a blank canvas for you to decorate on. You do need to have a cohesive look, though. Choose the color palette you like and stick with it. Bright and bold colors like red or a brilliant white contrast well for more modern and edgy designs, while neutrals and muted colors create more elegant, cozy atmospheres.

You also need to be mindful of the pillow material. Silky or satin covers will slide on the leather, meaning more often than not they’ll either be flat on the seat or worse: on the floor. Lightweight pillows like poly-filled will also have this problem, so look for heavier fillings like down.

For ideas on which throw pillows to chose for your black leather beauty, check out these examples! 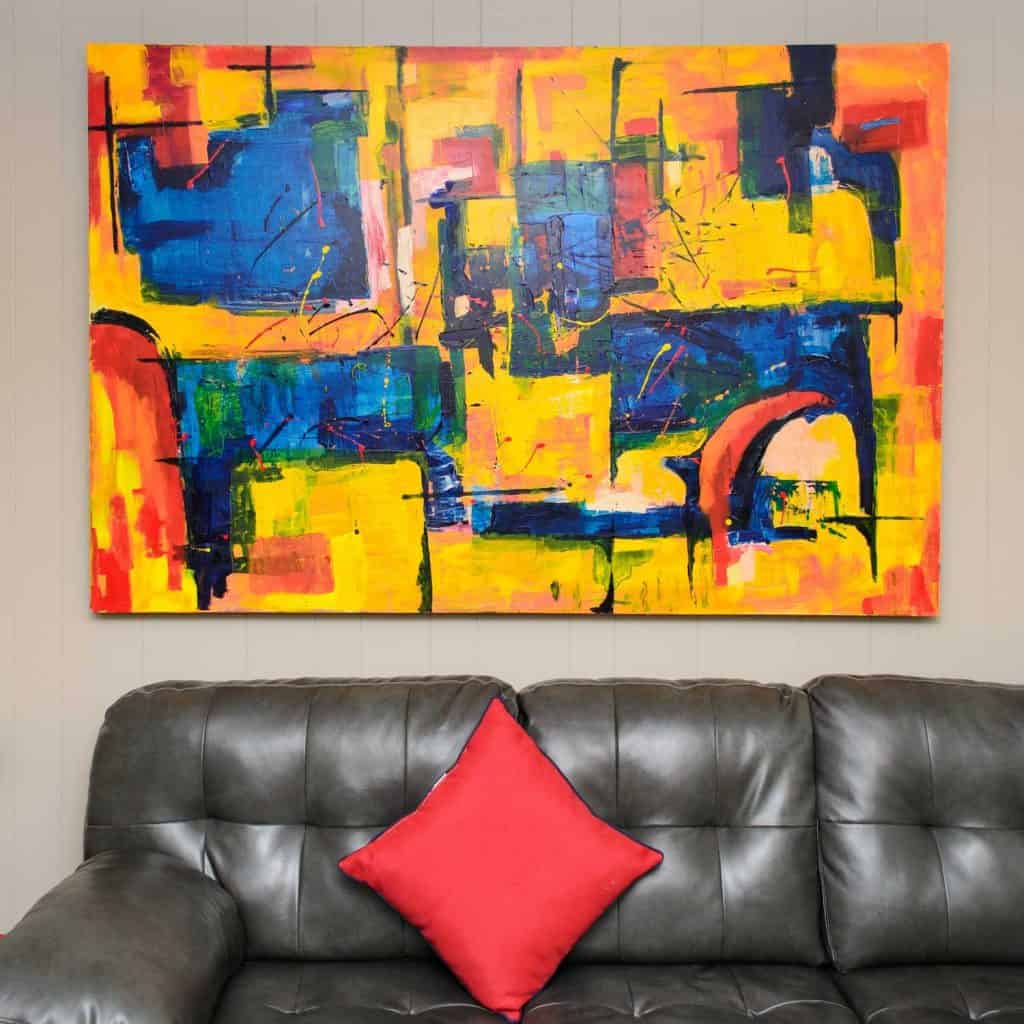 The red pillow really stands out on the black background of the couch and creates a bold statement. The red choice is great for creating a more modern design, as well as adding energy and excitement to the room. The square shape of the pillow also works well to add unity as it echos the squares made by the stitching on the couch cushions. 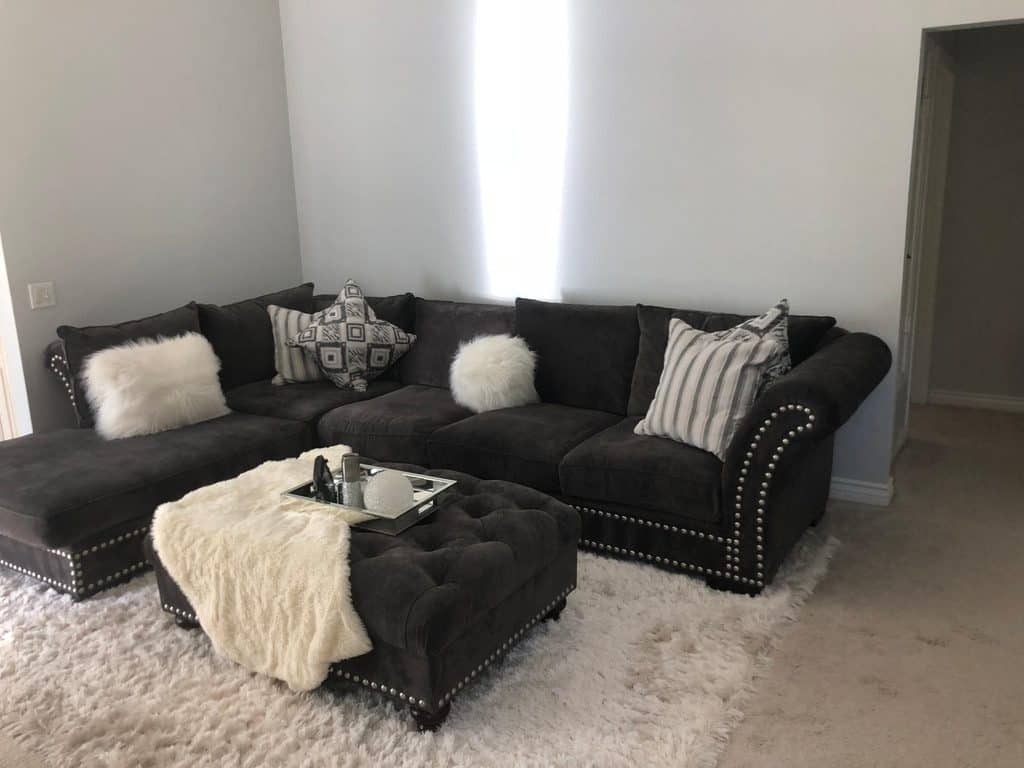 The colors in these throw pillows are solidly in the neutral section of the spectrum, but they really work well contrasting against the black. Also, you’ll notice a variety of textures and patterns. The designer of this room used these to add visual interest where the black and white could have been bland and boring. 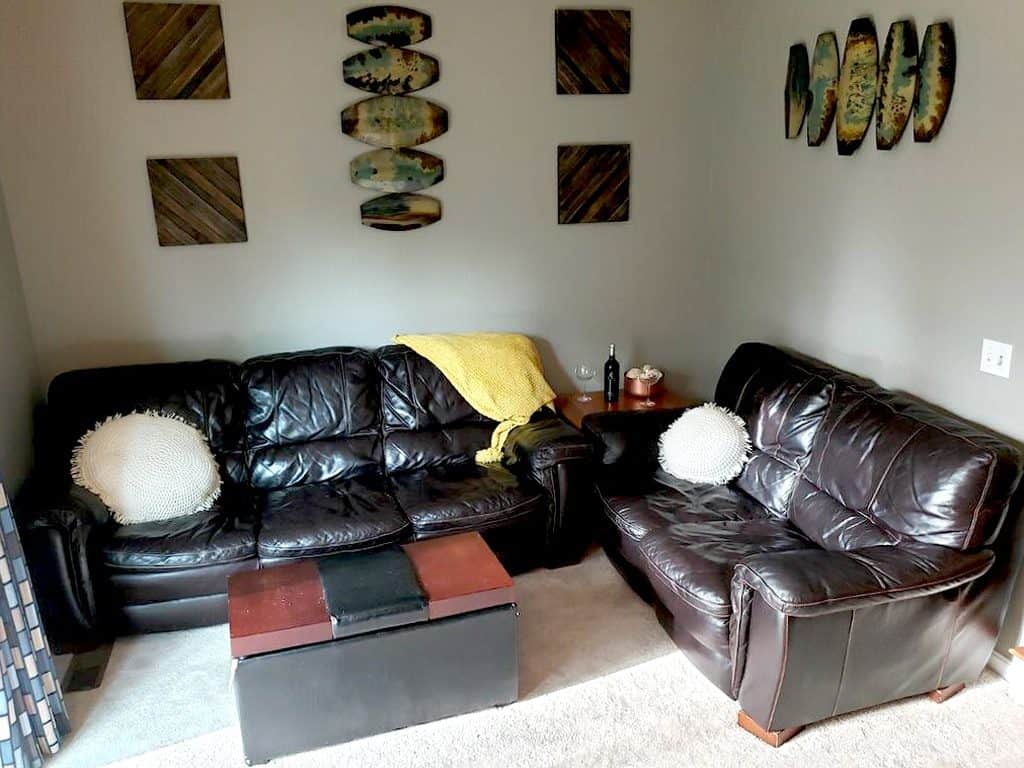 These furry white pillows pop against the dark background of the couch, and the texture used on them adds an extra level of interest to the room. Look again and you’ll notice that the circle shape of the pillows helps make them stand out in a room with boxy furniture, something else to consider when choosing pillows. 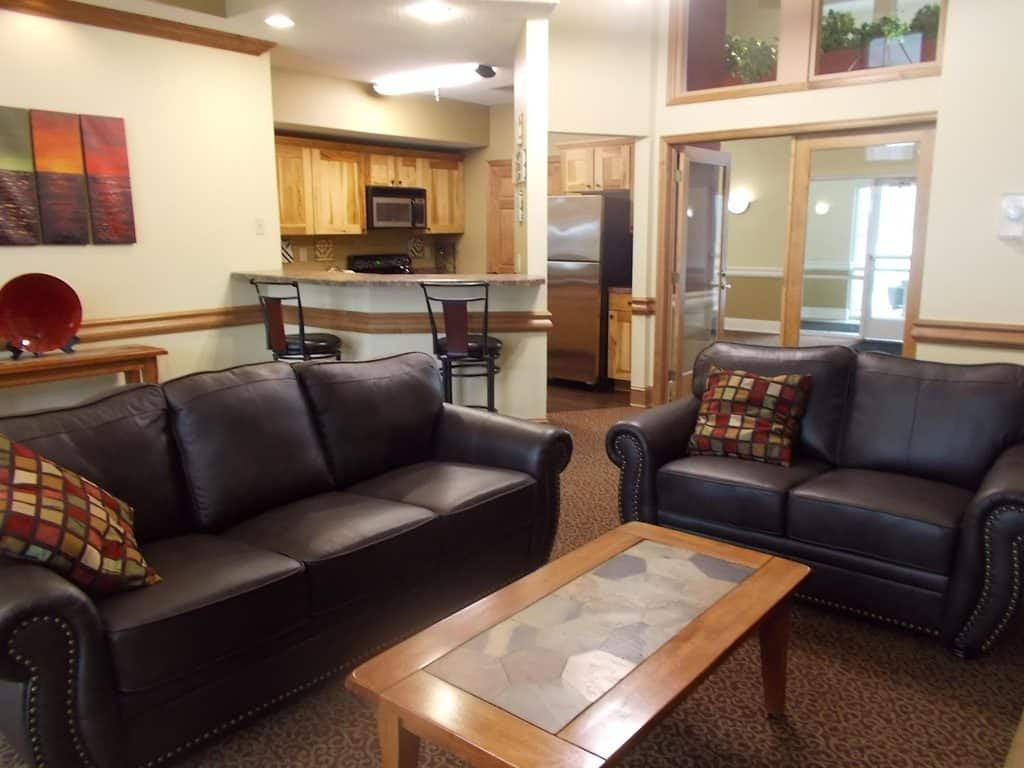 This is a great example of how to use a multicolored throw pillow on a dark couch the right way. The bright reds and oranges mixed with the white and green blocks catches the eye and makes them stand out from the dark couch, and even though there are several colors at work, each one resonates somewhere else in the room, creating a unified look. 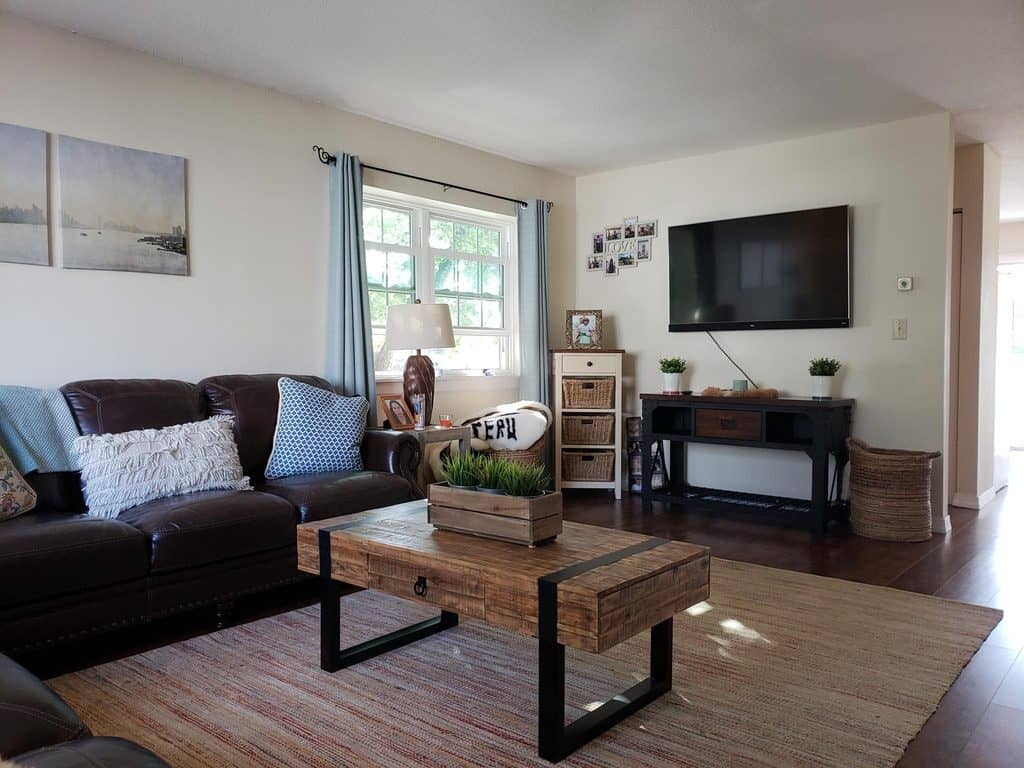 Blue and white might not be the first colors you think for a black couch, but as you can see here it works really well to soften the dark color. It gives the space a light and airy feel you wouldn’t normally associate with a black leather couch. 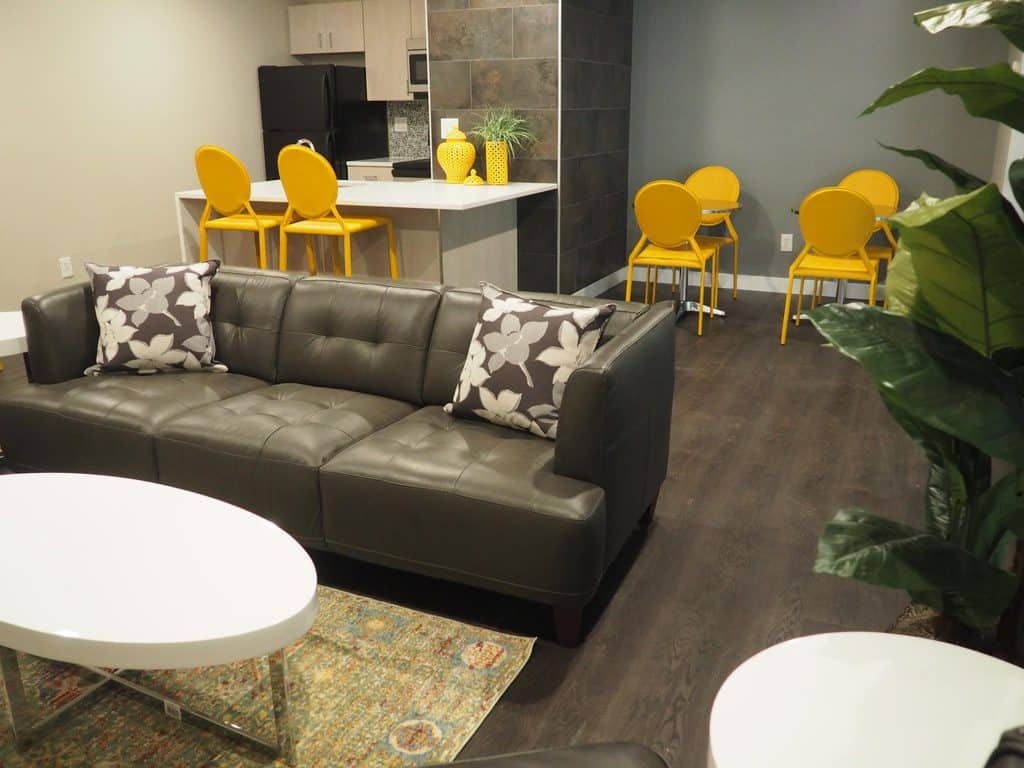 This couch could easily become the main design focus in this room, but the designer had another idea and used their throw pillow choice to pull it off beautifully. Pairing with grey and white pillows softened it, leaving the brighter colors for somewhere else in the room. This is a good example of how you can still have something as bold as a black leather couch beside another loud design choice and use your pillows to help avoid overwhelming the room.

7. Warming the Room with Neutrals 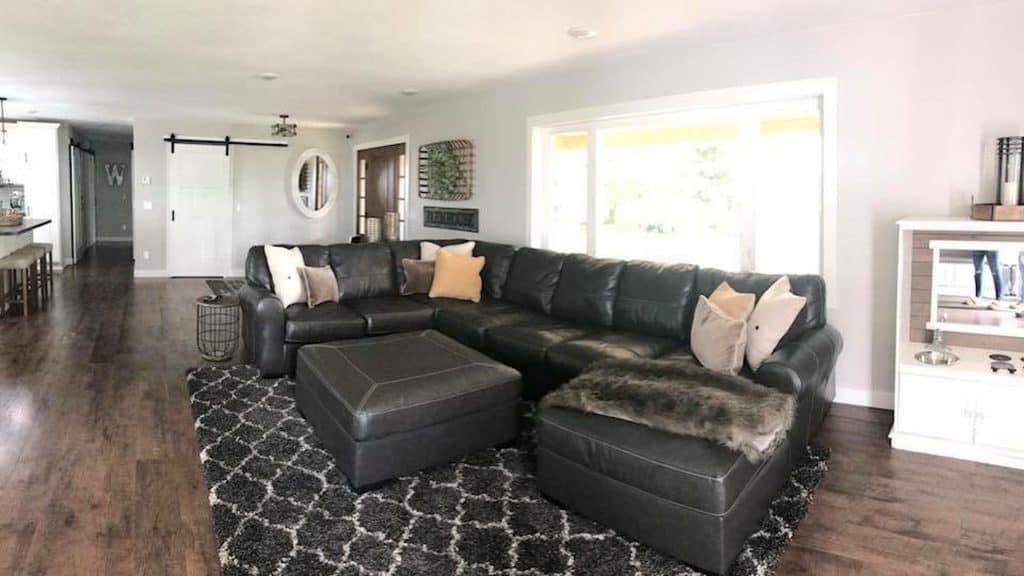 A black couch can swing the overall feel of the room to colder or warmer depending on what it’s paired with. The designer for this room chose to go warmer and used velvety pillows with warm neutral tones to do that. 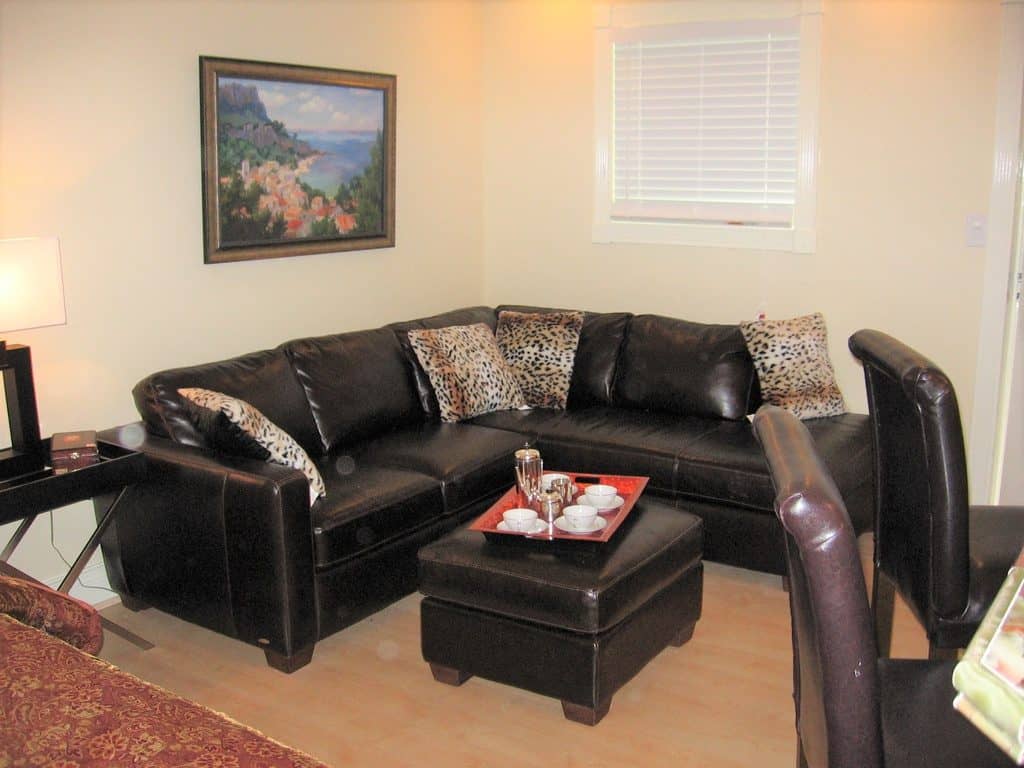 Using a print with a black leather couch is a fun idea, especially when there’s black mixed into the print itself. A cheetah print on a black couch is no exception, and the dark colors in both couch and pillows work together to make the lighter parts of the print stand out.

You typically wouldn’t think a black leather couch when considering a laid back, casual room. However, this image shows it’s not only possible, but it’s also a showstopper! The woven material used in the pillows creates an easy and cozy atmosphere, while the combination of the white and black give a nudge towards effortless style.

When you search ‚rustic living rooms‘ you’ll likely see a lot of chunky, brown leather sofas, but not much black or sleek. This designer didn’t let that hold them back though and used rusty orange, velvety pillows with a woven neutral pillow to give the more modern black couch the vibe they wanted to complement the overall style of the space.

This couch and pillow set oozes casual elegance. The monochromatic color scheme between the two create a unified look, and luxe velvet on the pillow adds a classy element to the room, and really exhibits the popular Scandanavian style beautifully.

These pillows contrast well with the black leather couch in a few ways. The off-white color is a wonderful pairing for softening the starkness of the couch while the oversized design is used to create a layer of comfort to a couch that has sharp lines making up its frame.

The fluffy white pillow jumps out at you, contrasting against the black, sleek material of the couch. The other two pillows are also neutral in color and have a linen appearance, which when paired with the fur pillow adds a sense of warmth and comfort.

This black leather couch is paired firstly with a great patterned pillow that echos the darkness of the couch and also pops with the white element. Then the designer added the bright green pillow for an unexpected dash of color in a mostly neutral room to draw your eye to the couch and make it the focus of the space.

The designer for this room also used green but in a much different way. Where the last image showed a bright, bold green, this room features a pillow that’s soft and muted. When paired with the other neutral pillows around it the solid pillow softens the starkness of the black leather, allowing the designer to create a laid back vibe in the room.

Another way to use pillows on black leather couches is to emphasize the space available. This designer used the white color that contrasts really well with the black to draw your eye to the corner, and only using a couple of pillows there makes the couch feel huge and luxurious.

This designer of this minimalist space used the black couch with a black and white pillow to really draw attention to the red accent color they chose. When using a layering technique like this you can showcase color in the room with only a few pieces.

This is an interesting and edgy look for a black leather couch. Using these pillows really unifies the whole look, and would work well in a number of designs. This room showcases a more contemporary style, and the sleek look of the black leather throw pillows helps it fit in beautifully with the glass and metal in the rest of the furniture.

A black leather couch wouldn’t be your first choice for a farmhouse design, but when paired with the neutral tones, natural material, and striped patterns in the throw pillows it really works! Notice the designer opted for fluffier pillows that sag and dip a bit to keep that laid back, easy feel that you want with a farmhouse look even with the bold black couch.

Giving a black leather couch a boho look is easier than you think, as this example shows. Natural, woven pillows with Aztec designs bring this couch from the modern style to a laid back bohemian vibe in a snap.

The soft yellow and white pillows on this couch create a soft, feminine vibe where you would normally think masculine. The material used in the pillows also relaxes the couch’s more traditional design and helps it balance the room that incorporates both bohemian and traditional design elements.

A white pillow with a quote on it is a great choice for a black leather couch. The white contrasts really well against the black, making the writing pop from both the couch and pillow, catching the eye and ensuring the message on it gets noticed.

This black leather couch could easily stick out like a sore thumb in this living space. The designer tied it together beautifully though, using the yellow in a pillow to connect it to the rug. The neutral colored pillows also compliment the wooden coffee table and the rattan chairs by the window, making the room fit seamlessly together even with the unexpected couch choice.

The darker elements in this room could easily make the room too dark, but the metallic gold and white throw pillows keep it fun and refreshing. The gold metallic elements are not only light in color but they also reflect light to help lighten the space. This is a good example of how you can pair a darker wall color with a black leather couch and use the throw pillows to keep it from making the room too dark.

This living space has definite rustic leanings with a bit of mid-century modern mixed in. The black leather couch is definitely on the modern end of things, but it’s casually incorporated into the rustic elements through the geometric throw pillows. The more modern geometric pattern is paired with neutral, warm colors to make this space feel complete.

A black leather couch, as shown above, can be a great addition to just about any space. Black leather is a bold and eye-catching choice. Once you pair it with throw pillows that fit the style of the room you’re aiming for, though, you’ll see it transformed into a gorgeous feature no matter what the overall look of the space is. We hope these examples help to inspire you in your next design project!

More decor ideas for you

Whether you already own a black leather couch or are just planning on getting one, we figure the following posts might interest you as well –

Considering a brown sofa instead? You can check out our post about throw pillows for a brown couch too. And just because we’re talking about them, why not broaden your decor horizons by learning about the 27 types of throw pillows? Last but not least – we want to help you find the best online stores for throw pillows in this post. Enjoy!