Shower curtains are an integral part of your decorating in your bathroom. Along with your floor mats and towels, it’s your main centerpiece, so you want to make sure you’ve planned everything through. Aesthetics and color scheme are the first thing you may think of and may even be what you make your decision on, but what about practicality? Hygiene? How long should your curtain and liner be? Is it sanitary to have it touch the floor?

The average length of a shower curtain is 72 inches long and should be installed 75-77 inches from the floor, that way it isn’t touching the floor. However, many people deviate from this for reasons such as aesthetic, preferring the look of the curtain touching the floor. 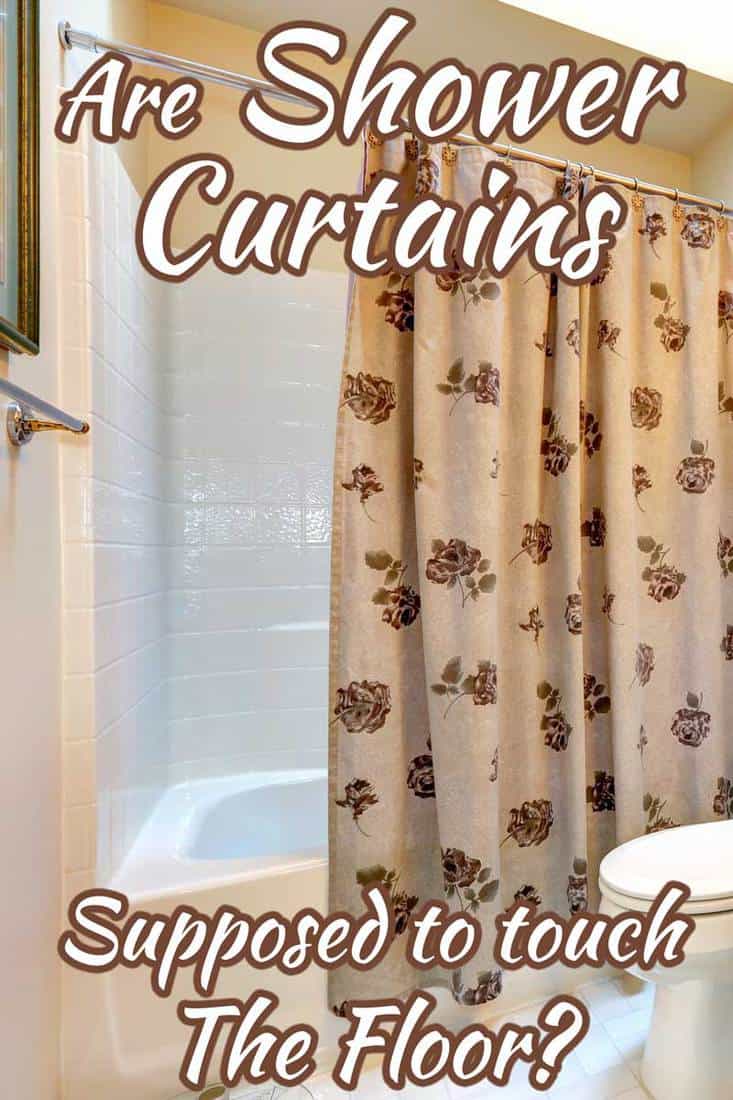 The topic of „should the shower curtain touch the floor“ has been the topic of discussion and debate for a while now, but what side should you take? Keep reading and we’ll provide you with the information you need to make that decision.

Are Shower Curtains Supposed to Touch the Floor?

The great debate that has been going on for ages: should you let your shower curtain touch the floor? Is it sanitary? What about practicality? Many people do their own thing and go about it their own way, but in order to put a solid rest to this debate, we need to take a look at what some of the professionals recommend.

As previously stated, the standard size of a shower curtain is 72×72 inches, but there are several other different types of curtains and they all require different types of installation. There are extra wide curtains for bigger showers and tubs, floor-to-ceiling length for people who want to be completely enclosed in their shower, and there are wrap-around curtains that wrap around 2 sides of the tub or shower. What kind of shower curtain you need is entirely dependent of the shower and design of your bathroom.

There are several different kinds of shower curtains as well. You have fabric, plastic-lined, and vinyl. Fabric and Vinyl are the most popular, with fabric curtains being made with either cotton, microfiber, and polyester and usually dual-lined with an inner vinyl curtain. These come in many different colors and sizes and are a major statement piece to your decoration.

Most people do a combination of two curtains at a time, an inner and an outer curtain- the outer curtain being decorative or aesthetically pleasing, while the inner curtain is more for keeping the water in the shower and out of your bathroom. Most inner curtains are plastic or vinyl to keep the curtain from getting gross or molding, unfortunately, however, this does not fully keep them clean and sanitary long term. There are many ways to keep your shower curtain clean and mold-free, which we will discuss further down.

A Matter of Preference 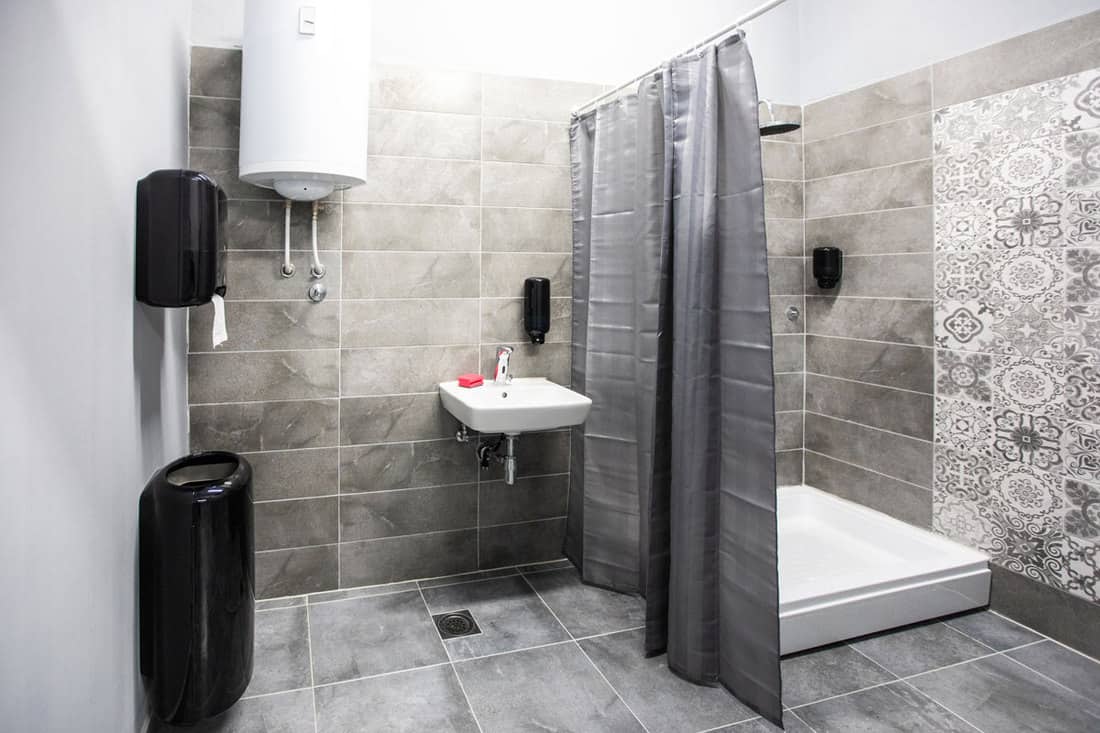 There is a pretty decent debate on the topic of if you should let your shower curtain touch the floor or not. Some people insist it is unhygienic to let your clean shower curtain touch your germ covered bathroom floor. Many people disagree, however, believing that your bathroom germs are already going to be on your curtain and that it doesn’t really matter.

The length of your curtain is really less about sanitation issues than it is about style and functionality. If you choose, you can keep your curtain long enough to touch the floor, as long as your inner liner reaches at least 6 inches into your tub to reduce any potential water leakage. Many people actually even prefer curtains that reach from ceiling to floor! However, it is recommended that your curtain be elevated at least 2-5 inches off the floor to maximize its usefulness in keeping the water in the shower as well as looking neat.

Are All Curtains the Same Length?

As stated before, your standard shower curtain is about 72 inches long, but there is a super long option for stand-alone or claw-footed tubs that reaches from the ceiling to the floor- about 84 inches in length. Now, while they do not vary much in length, they can vary in width. A shower curtain could be either 58 inches, 70 inches, 72 inches or 188 inches in width, all for different size showers. The longer the width of the shower curtain, the more likely it is that your curtain is for a wrap-around shower or tub. For the sake of your decor and design, you want to get a shower curtain set that is similar in width as you shower, that way your design does not get distorted or messed up while it is closed. 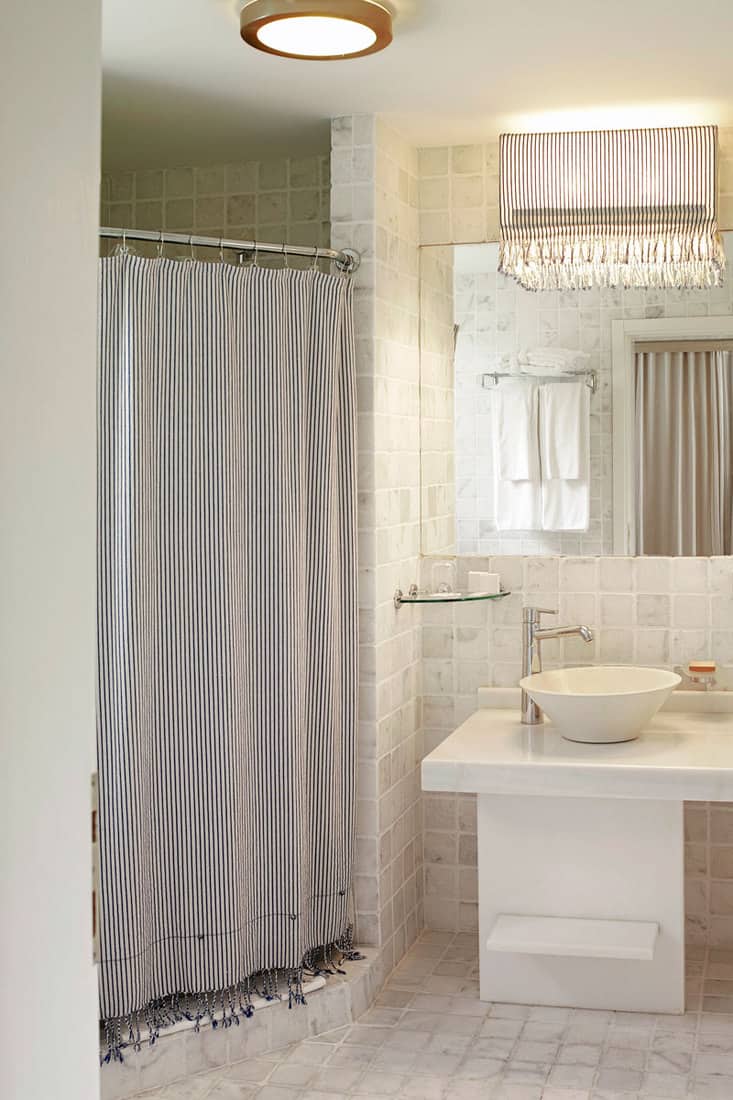 However, some people prefer to leave the curtain open to make the room seem bigger. It may also seem more useful if you use the shower for things during your day other than showering.  In the end, how you leave your shower curtain is entirely up to you.

How Do You Keep Your Shower Curtain From Getting Moldy?

A moldy shower curtain is not only unsightly but a health hazard. Unfortunately, anything frequently exposed to moisture is prone to mildew and mold, but there are several ways to combat the issue.

If you have a fabric curtain, you may throw it in with your laundry and dry it as such, making sure it gets fully dry before use again.

If you have a plastic or vinyl curtain or inner curtain, spraying and wiping the curtain down with a distilled white vinegar will kill any potential growing mold or mildew.

You may also want to make sure that after each use your shower curtain is left in a position that will allow it to dry as evenly as possible: the fewer folds and creases to trap water, the better.

If you ever find your curtain has begun to mildew or mold, throw it out and replace it, to reduce the health hazard that mold can potentially cause.

Shower curtains can be the best and most impressive piece of decor in your bathroom, as well as the most functional one at that. It keeps the water from your shower from flooding your bathroom, while also potentially hiding a messy bathtub from guests. There are several debates on how to keep your shower curtain as clean and fashionable as possible, as well as how it should be taken care of long term. We have given you the information needed to make your own decision on the matter, so you can go forward with the best looking bathroom possible!

Thinking about buying or replacing your Shower Curtain? You maybe interested in reading Where to buy shower curtains online? This would really help you look for a website selling Shower Curtains.

Also read about the 13 Types of Curtain Hooks and Tiebacks